What innovative ideas do your coaches use to train you?

I think this would be an interesting topic.
So coach what ideas have you come up with to coach new ideas or practice ideas to improve a players badminton game.
Players, what have coaches taught you that was maybe a bit left field but helped you grasp a particular shot, movement etc.
Over to you : )

I may as well start this off with some of my older unusual things.

One young player I worked with grasped the shaft of his racket with his left hand after every shot. So, i put a tennis ball in his other hand and made him hit shuttles this way.

He grew up to respresent Lancashire County and if I'm not mistaken made the England junior squad/team too.

I also used a tennis ball to teach movement because a low bouncing ball ensure the head stays in place and legs are bent in the transfer from base to shot preparation.

I've loads but let's allow other to have a go. 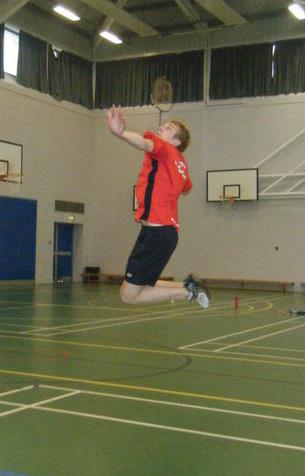 My county junior coach was known for taping players hands to their rackets in order for them to play with the correct grip, unable to go back to old habits, until it felt natural and the tape could be removed.

Another coach I had used to get us to pretend we had a rubber ring (the swimming floats that go around your hips) around us when we played, so our rackets were always in the 'ready' position. I heard 'rubber ring' shouted at me numerous times across the hall as a kid and I seem to remember somebody in my group actually being made to wear one because their racket carriage was so poor.

Once my technique had been honed, I also practiced a lot of backhand clears, against a wall, with a squash racket. This gave me good power from a young age. I wouldn't advise doing this until the correct technique has been ingrained, so as not to cause undue stress to the body.

A bit left field, but as a young child I also did a lot of gymnastics and was lucky enough to live right near to the national academy at Lilleshall. The balance, strength and movement skills I learned here I was able to transfer onto a badminton court and i believe this has played a major part in me never succumbing to injury in 12 years of competitive play at a decent standard.

I was considering electric shock therapy…but apparently the County safeguarding officer wasn't too impressed with the idea. Jeez, I was only going to use 110V… 🙂

I haven't used any novel ideas yet…looking forward to stealing some off of this thread!!

A lady I know who lived in Denmark use to play to music. The coach would play music at different tempo’s to which you had to either had to speed the game up or slow it down then return to normal game speed.

They also took the nets off court & all players would do quick feet movements to music.

4 v 2 games, where the side with 4 players were divided into 4 numbered boxes, the 2 players were told to hit all the returns in to a box until the coach called out another number.

I've used music a lot and this may make a welcome return when I'm next at lilleshall!

I've used bin liners to black out the net for eye and fast hands training. I've also used boxes and all sorts of devices as targets.

Many readers know I like to use racket covers and this will feature a lot more at lilleshall too.

One of the most unusual things I did for doubles was tying a pair together with string. Players who have been to Lilleshall know this has evolved into wearing special belts with bungee chord stretching between the players. Note: I do not feed shuttles whilst the players are tied together, although have been tempted. Sadly, it's just too dangerous.

I've stood on tables feeding shuttles to players, I stood in front of them to make them move in a certain way, I've chased for speed…the list goes on.

I will say that my favourite training aid is the shuttle bag. The phrase “aim at the bag” takes my below par tired shots into deadly accurate and consistent shots. If only people were to place a bag on court for me when I played games!

I have used the “hold a tennis ball in the left hand” one to stop players changing their grips between shots (using their left hand to tweak the grip!).

Here's one to nick John.

For reflexes and lunges. A partner stands facing the player with an arm extended to the side holding a ball palm down. The partner drops the ball and the player lunges to try and catch it before a second bounce. Use balls of varying bounce, tennis,ping pong,golf etc. For advanced players a squash ball is a killer.

You can move the training on by using both arms and having 2 balls in each hand, don't let the player know which ones, and drop them randomly. You can also varying the timing of and  distance from the release.

Rogerh – thanks, sounds like a good reflex exercise…sadly it doesn't involve mains voltages…..

Paul – I was discussing music with my coaching mentor; I would certainly like to use it to improve rhythm and footwork speed. I was going to use a sheet draped over the net to hide hand fed shuttles – again to improve reaction times and to prevent the player moving before the shuttle is fed. I like the bungee cord one – I was thinking about that the other day – how can I get doubles pairs to act as a single unit…I often talk to the players about being effectively joined by an invisible pole (a bit like the man and woman on the weather clock)

When I was “taught” to move in doubles, I was told to visualize two planets orbiting each other, either clockwise or anti clockwise depending on which side of the court you were on.

Its similar to John's analogy with the pole.

Personally, i prefer the analogy of the pole or of planets than to the one of the string. The reason for this, is that whilst the string stops people getting too far apart (a HUGE problem), the pole stops them getting too close together, and forces them to readjust their positioning based on the way their partner has moved to an even higher degree.

E.g. you have one person in mid court, and one in rear court. Rear court player comes slightly forwards to retrieve a shot from mid court. During that instance, his partner should have moved backwards and sideways slightly as his partner occupies a new bit of the court. With the bungee or string analogy, the mid court player could stay where they are. With the pole/planets – they have to move!