Just wanted to point out how amazingly well the Japanese mens and womens teams are doing in the Thomas and Uber cup at the moment. Japan do not have a history of doing well in these tournaments, but have reached the final of both the Thomas and Uber cup competitions! An amazing effort. In particular, the Japanese mens team beating the Chinese mens team was one of the best performances I have seen – particularly Kenichi Tago beating Chen Long so effortlessly and Endo and Hayakawa for beating the Chinese mens doubles players. Brilliant game!

And, without any hesitation, I put all of this credit on to their head coach – Park Joo Bong. Ever since he started working with the Japanese squad, he had made a difference, but I genuinely believe they wouldn't have achieved this without his direction and advice.

Looking forward to a great match between Japan and Malaysia in the Thomas Cup final – will this be Lee Chong Wei's year to win the Thomas cup? Exciting!

Not to forget rising star Momota against Du. Tago has been impressive the whole tournament. I have the impression all MD pairs of Japan have a high speed of game. Very prone to error, but what a joy to watch. Top level badminton, in both cups. What chocked me, was rumors are going on to rethink the 21-2 winning sets scoring system again. After seen these matches I would have no idea why to change. If BWF wants to change anything, here's an idea: the Thomas cup trophy is quite a size larger than the Uber cup trophy. Anno 2014, I thought we were passed all that. I hope at least the prize money is the same, the quality of the games are equal.

Looking forward to the Thomas cup final tomorrow. Both teams are very hungry on winning this cup, sadly only one can win… You're very right about Bong. He's worth every penny.

I've been saying for years that Japan is on the rise in world badminton circles despite their relatively small population. I've seen so many Japanese players enter the top 20 world rankings over the last two years.

I agree with Matt that much of the credit is down to Head Coach Park Joo Bong and his team. PJB is perhaps the most successful doubles player of all time winning countless double events in mens and mixed. Do doubt his training has been so well received and the players have all adapted to his methods to such an extent that success is gathering momentum. And good luck to them in the future as it's a delight to watch.

It's such a shame that Badminton England appointed PJB many years ago and he lasted so little time. I wonder whether that's the players not responding to his techniques and methods. Maybe it was political – who knows, but he's proved his worth and maybe BE should be kicking themselves. I'm amazed Korea has not invited him back to work with their teams. 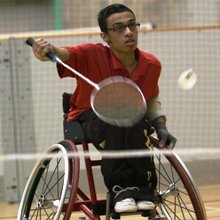 Just watched a thrilling Thomas Cup final between Japan and Malaysia! Massive congratulations to Japan winning 3- 2!! Could have gone either way. Fully deserved winners but credit and thanks to both teams for such a great match! Park Joo Bong certainly has done a great job in Japan!!

My congratulations to Team Japan winning the Thomas Cup. I haven't seen the match but by all accounts it was a thriller. I do feel for Lee Chong Wei having won every match and yet receives a silver medal. That said Malaysia is still relying on him and he does not make a team. Malaysia needs to find a few good players.

Looking at Japan, there seems to be wave upon wave of new names coming forward and lots of players at such a high level under 19. For such a small country they are certainly challenging the might of China. I'm sure Li Yongbo, Head Coach of China will be fuming although the Chinese ladies won the Uber Cup.

It's great to admire these countries but I'm still perplexed why we cannot do more for our players. Why is it our ladies are so far behind and what can be done to change this?

If a small country like Japan can find class players. Maybe in 10 years we will. Can’t believe France got further then England. A player who caught my attention was Ashwini Ponnappa from India.

Badminton is now firmly in the Japanese culture. Sadly I do not believe that will ever be the case in England. The way we are going, given 10 years we'll be lucky if we can find any ladies to play at all!

The finals were more of a nerves clash than anything else. Both could have won.

For doubles: not sure about the Japanese 2nd MD pair, like Frost said in his comments:”in the 1st game they smashed themselves empty, and didn't win points with those attacks”. Japan MD1 pair: awesome! Very tense to watch, and they really try hard to prevent the opposition gets the attack. Great matches. Good to see Tan back on court. Can't wait to see him play with Goh, that will be firework for sure.

For singles: What I liked: the new generation of single players made the difference for both Malaysia and Japan. Very high quality of game, but they will have to do something extra to beat LCW.

Can't help it, but I really missed Thailand. But after all, Japan surprised me. They did very well, but about everybody knew beforehand China would win. Their WS, I guess here too the nerves took their toll. Team China looked very calm and relaxed.

After all, Japan made both finals ! Look 5 years back, where Japan was then ? And look where they are now: impressive ! I share the same feeling about Thailand, although they disappointed a bit. Quite sad too the arena was far from packed.

I agree with the previous posts that it was a great Thomas cup final.

A real nail-biter last match and, thanks to commentary from Gillian Clarke and Morton Frost , you could almost feel the tension coming through the screen.

I thought the coverage, I believe from Malaysian Astra pay TV, was some of the best I've seen. Knowledgeable and enthusiastic commentary by the a for mentioned, good use of different camera angles without being gimmicky and the added bonus of the Hawkeye moments.

I hope the TV  producers of the upcoming NBL take note.

Well done to both Japanese teams and their coaching staff.

Understandably there is little information on P J B's coaching methods, but it's widely believed that he is given a pretty free hand and is a firm believer in the squad system.

Whatever he does he has the players buying into it, and to great effect.

As for our domestic game here in the UK.

Badminton England's priority at the moment is to get as many bodies as possible to pick up a badminton racket and thereby reach their participation targets. Fair enough but these sessions are run by “Activators” not coaches so I would suggest that the opportunity for spotting and encouraging talent is limited.

B E have yet to appoint a new Performance Director following the departure of Jens Grill and, reading the job description, is seems they are after someone to implement an existing plan rather than develop new strategies.

There are many talented and hardworking coaches in this country  who are totally disillusioned with B Es lack of support and guidance particularly at grassroots.

I know several coaches who have launched initiatives, particularly regarding young people, with no involvement by B E at any level. What have the so called “Development Officers” been doing. Very little if my neck of the woods is anything to go by.

Sorry to end on a rant but the ivory towers of Milton Keynes seem a long way from the world that's going to produce the next generation of players.

As always I look forward to any comments, particularly from coaches.

Roger I agree with your sentiments.

There are coaches up and down the country doing so much good for our young players. However, we are so far behind in terms of development in ladies and I have no idea what the answer is.

Maybe we need to get the top 100 girls to BE for a weekend and assess, develop programs for them and ask their coaches to follow through in their development. Possibly run this 3 times per annum and monitor progress. Follow this through the age groups and see where we lie in a few years.