Ashaway is a USA-based company who are one of the oldest string manufacturers in the world. Founded in 1824 Ashaway became known for manufacturing high quality fishing line. They began making racket strings in 1949 and were the first to introduce Kevlar strings to the tennis market.

Ashaway USA now manufactures a wide range of products from racket strings to lines used in heart surgery. Such exacting standards are a norm from this company which is why they are regarded as one of the best racket string manufacturers in the world.

I have used Ashaway string since the mid 1980’s. Back then, their badminton strings were regarded as the number one string in the UK with most of the Team GB players using Rally 21, a string which is still very popular today. They are still held in the highest regard by players, coaches and stringers.

The introduction of the Zymax range, and most recently the superb Beta Polymer Zymax Fire has seen a surge in popularity for Ashaway badminton strings. Players across the world are switching to these strings which offer exceptional feel, outstanding response with increased tension stability.

All of the Ashaway Zymax Fire badminton strings are multi-filament strings. Multi-filament strings consist of many individual strings wound together to create a strong core, with an outer core that comprises intricate weaves to provide bite or grip on the shuttle. This means they are great for absorbing shock and also offer great touch, control and power.

I was honoured to be asked to beta- test the new range of Zymax Fire strings and provide feedback long before the initial launch of the string. They have become my string of choice and I therefore stock the full range of Zymax Fire performance badminton strings, listed below: 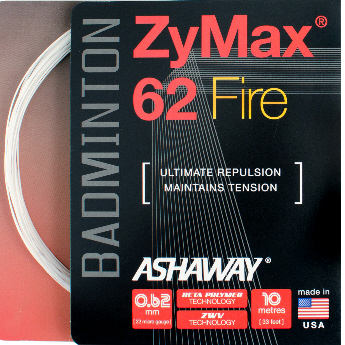 Ashaway ZyMax 62 Fire is a 0.62mm badminton string that is designed for maximum repulsion and shuttle response.  BETA fibers provide superior strength and toughness characteristics for this micro gauge string. ZyMax 62 Fire is recommended for high performance playability and usage by professional and advanced amateur players 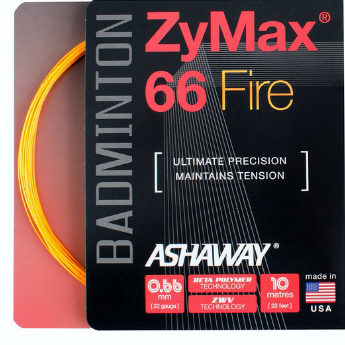 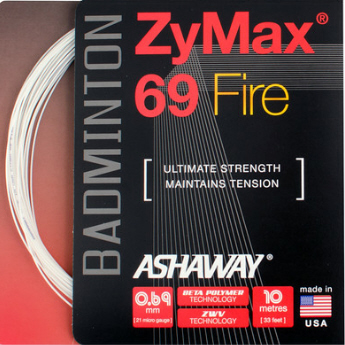 ZyMax 69 Fire is a 0.69 mm string designed specifically for players who are especially concerned about durability and string life.  ZyMax 69 Fire is recommended for players at all performance levels and for use with extreme tensions and under the most demanding playing conditions. 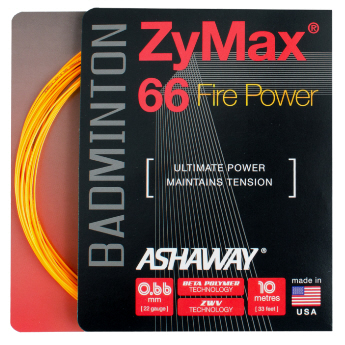 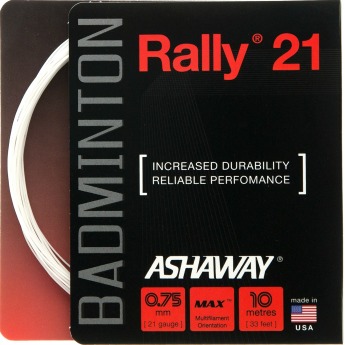 The Rally 21 is part of a family of badminton string which features a 1000 multi-filament core utilises MAX filament orientation technology.

Our Rally 21 Badminton string is 0.75mm in diameter for increased durability. A multi-filament core with MAX orienitation of filaments increases string life and insures reliable performance.