Which Brand of Shuttles ? 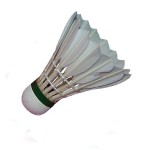 I’m an avid tester of shuttles as I do a lot of coaching. I’ve been coaching for over 20 years and playing for over 30 years.

There’s no doubt that shuttles were better 30 years ago. Leading the pack then was RSL. In those days RSL were manufactured in UK. Sadly, RSL shuttles today are a poor imitation of their ancestors, although they still rank highly.

So what does that say? Most shuttles lack consistency in flight and speed and many just do not stand up to a good few rallies. It’s fair to say that it’s hard to compare like for like as we don’t play with the same racquets today. Racquet technology has moved significantly since 1980’s with Yonex leading the way in terms of introducing us to a new head shape and space-age super-strong and yet super-light materials.

In the race to keep prices reasonable (remember there was a shortage of feather s not too long ago because of the bird flu epidemic), some shuttle manufacturers have attempted to cut costs by introducing foreign materials to our shuttles. Many, such as Wilson now have a combination base comprising of part cork and part composite material. I salute them for trying something new. For me this combination doesn’t work and I can tell the difference on my racquet between an all cork or combination base.  Also remember that most shuttles are made by the same manufacturer and then branded so there’s actually no difference at all between many brands.

So, we’re left with the dilemma between paying for consistent flight and a degree of durability compared to inconsistent flight and who knows how long the shuttle will last. Generally I’ve found the cheaper shuttles to be a false economy usually using significantly more in matches. When monitored, these so called cheaper shuttles are certainly not the best value for money. Consistency in speed in one tube can sometimes be a joke.

By the way, look up cheap in the dictionary. Oxford English dictionary describes cheap as inferior and that is exactly what we are paying for.

Whilst I’m just like you and dissatisfied at the colossal increase in the price of feathers, there is one brand that has been consistent in its quality control above all the rest from the dozens of tests I’ve done. No surprises therefore when I name the brand as Yonex.

Usually I use Aerosensa 30 or 40 although I love the 50 best of all. I’ve been testing the new duck (yes you read right, duck feather, not goose) feathered Aeroclub 07 introduced in 2009. Yet again, and no surprises to note consistent in flight and speed which is rare to find these days. Will they take the pounding from a league match or heavy training session? Probably not, although I’ve not had enough time to measure how many I use compared to Aerosensa to provide this data.

I understand Yonex go to great lengths when shipping shuttles these days to package them properly, therefore virtually eliminating the “bad batch” syndrome.

Will we return to plastics because of the increased prices? Probably not. There’s not a single plastic on the market that can fly like a feather. Additionally, who wants to injure their shoulder or arm thumping these things compared to stroking a feather – no one.

Let’s face it, whether we like it or not, the cost of playing our beloved game is increasing. Fortunately, the costs aren’t so high as to make the game elitist because that would be the biggest shame of all.

My advice to all readers. Find the shuttle you’re happiest with and stick to it. For me it’s simple, I only choose Yonex. Occasionally test another brand if you really have to answer the cost/quality question. Best of all, get together with your badminton friends and buy in bulk to get the best prices.