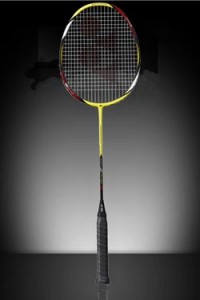 There’s been a tremendous amount of traffic on the forums about this racquet. I can’t remember a time when a new racquet was so eagerly awaited. Yonex Japan website enticed us with their advertising, however, they kept us all in the dark about the looks of this racquet until a few days before launch.

When pictures were available, the racquet met with mixed response. Some said it was ghastly whilst others raved over its colourful graphics. But, did it live up to the hyped anticipation and expectation? Let’s get into the review. Above all else, please remember that choosing a racquet is personal and you are the only person to judge whether this racquet is for you.

With all the hype surrounding this racquet, I was expecting a flashy cover – something different to set it apart from the rest of the Yonex range. As you can imagine, I was a bit disappointed when I saw the standard Arcsaber racquet cover. Fair play to Yonex though, they are trying to standardise their range so, in some ways, why should this racquet get special treatment?

I had that Christmas morning feeling as I slowly unzipped the cover and pulled out the racquet. Wow! I was met by the most striking graphics I’ve seen on a racquet for some time. If you’re ultra conservative, you may see the racquet as flash or gawdy but I really liked it. The graphics combine black, red, yellow, gold and white.

At first glance, apart from the graphics, this looks like any other racquet. But, there are a number of differences when investigated further.

First off, the head looks slightly thinner. Initially I thought this was due to the stringing. But, Yonex stringers are amongst the best in the world so this needed closer inspection. No, this is definitely a slightly different shape, drawing in from the sides by approximately half a centimetre each side, which is considerable. The head length is the same.

The shaft is approximately 1cm longer than my Nanospeed 9900 which should therefore generate a bit more power. The handle is around 2cm shorter and ferrule (plastic piece above the handle) reduced by around 25% (my estimation.) The ferrule itself looks considerably smaller and is a slightly different shape. Personally, I can’t see this adding much, if anything, to the racquet’s performance, although I’m sure the marketers will tell you differently.

The racquet is a standard 3U (weight 84-89g) with grip size G4. This is a little surprising as usually in UK we get grip size G3 which is slightly larger. Yonex have previously supplied larger grip sizes to our market as they consider we have larger hands. So, I can’t understand why this top-of-the-range racquet is supplied with the smaller grip size. Let’s move on…

So how does this racquet feel? Certainly it’s different from Arcsaber 10. It’s almost a cross between Armortec 900 Power (which readers will know is a particular favourite of mine) and Nanospeed 9900 (my current racquet).

It’s certainly well balanced although I’d say there’s leaning towards more weight in the head. Prior to heading out of the door, I put a grip on the racquet and couldn’t resist a few swishes in my front room. Wow! The speed through the air was amazing. Certainly a lot less “drag” than other racquets.  This racquet certainly felt fast for power shots which was a surprise, bearing in mind the heavier head. It’s going to be interesting to see how it delivers both in terms of overhead power and defence.

I used the racquet this evening in a training night at my league club. First off I played a game of men’s doubles. In the warm up I felt pretty good about the racquet although knew it was going to take some getting used to.

The racquet is certainly solid enough. My touch was slightly off, but that was partly due to the lower string tension and me having to adapt to the racquet. The slightly heavier head was noticeable although it was certainly fast around the net.

Where this racquet scores big time, is when you actually time the stroke properly. The shuttle then travels like a bullet and all the comments about how powerful this racquet is can be believed. In the warm up I hit a few good smashes that went down like a shell – fantastic, I’m ready for the game now.

Wrong! Getting my timing right in the warm up did not prepare me for the speed of the game at all. I found that, even with my experience, I was mis-timing so many overheads. Whilst I stuck at it, we lost the game easily which was disappointing.

I then did some feeding with the racquet and it felt really good. Lots of underarm feeding was a piece of cake. I was still very conscious of the weight in the head of the racquet and felt very comfortable with it.

Following this, I worked with the players on defence. Having previously been the feeder, I was very keen to get involved as a player and try the racquet. I was delighted with the results. This racquet was really solid in defence moving very quickly to respond to the shuttle. The extra weight in the head felt great and gave me that additional kick in high lifts to get a good length, even when digging shuttles out of my racquet hip.

Following this we did some fast hands work around the net. Again, I was delighted with the racquet. It was certainly fast enough in this department with the added “meat” and consequently control I’ve missed when using my Nanospeed 9900.

Sadly, I didn’t get to play another game – I’ll have to wait for next week.

To sum up my evening, the racquet performed like a trouper in all departments except my overhead – the place where it’s supposed to shine brightest. I really was delighted with all the areas we tested, and boy we tested hard tonight.

I’ve read with interest from the badminton forums the comments made by players who have purchased this racquet and found it’s not suited them. I can fully understand the frustrations from these players as I guess I was having exactly the same feelings early in the night.

This is a brilliant racquet, no doubt about it. So, why I can’t I play with it immediately? The answer is simple…

This is a pedigree racquet that requires coaxing into greatness. When you time your shot right, this beauty delivers power in abundance. And here lies the crux of the matter…”when.” This racquet takes more getting used to than any I’ve used before.

Maybe it’s the combination of longer shaft, shorter handle and smaller head? Maybe it’s the aero-dynamic head that moves so fast when asked to perform in this manner – it’s almost too good for me right now.

Having thought more about what I’ve just written, I’ve come to the conclusion that it’s the racquets ability to generate such magnificent speed through the air which is catching me out and throwing my timing. When I master this, I believe I will tame this beast and be able to get the best from it.

I also lent this racquet to other players this evening. The looks on their faces when they timed a smash were a sight to see. I witnessed some awesome smashing with this racquet tonight. But, these huge smashes were a very small percentage out of the many hit during the evening.

Personally, for many players it will be out of reach. Maybe not from a price perspective, but more so in terms of what they can get out of it. An average league player can do better by choosing their next racquet wisely, rather than thinking the most expensive is the best racquet for them.

Having said all of that, and despite me not making a marriage proposal on our first date, I really do love this racquet. I want to spend more time with it, get to know it better and find out how to make us a perfect partnership.

This racquet has bowled me over. I don’t exactly know why, but I’m itching to test it again, and again and want to master the overhead timing and see what this beauty can really deliver. I can’t wait for our next date.

I can’t remember the last time a racquet had this effect on me. So despite the immediate negative aspect which I think is due to the astonishing speed through the air this racquet generates, I am going to rate this racquet at 4.5 stars. I really believe this racquet has the potential to be a classic, if it can be tamed. I’ve deducted half a star because of the price although must confess that this could become withdrawn completely and changed to a 5 star rating when I get used to the awesome power this racquet generates.

I may have to write an additional review on this racquet when I’ve had a little more time with it. Watch this space…