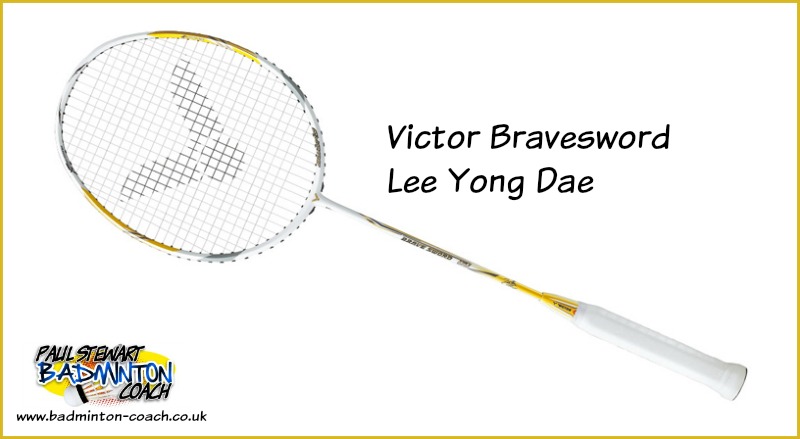 One of their most popular racquets is Bravesword Lee Yong Dae  – a signature version of the racket chosen by former Olympic Gold medallist Lee Yong Dae (LYD) from Korea. Whilst still relatively young, LYD is firmly established as one of the best men’s and mixed doubles exponents in the world today. As I write this review, he and partner are ranked number 1 in the world.

I recently had the opportunity to test this racket for a retailer which has led to me writing this review for you.

I’m a huge fan of Victor’s Bravesword series as I really enjoy the speed of the frame. The potential for increased swing speed means the racquet is fast in defence and attack – a great combination in my view. 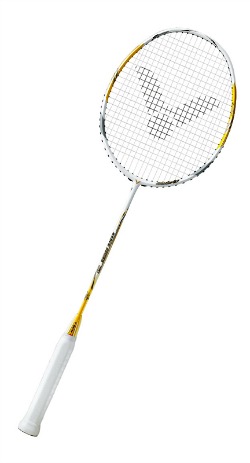 The Bravesword LYD arrived in a smart red and black full length racquet cover with LYD’s signature in white. The racquet looks good in white, yellow, gold and grey. There is now an updated version in terms of colour but apart from that, the racquets are identical  These are now known as generation I and generation II.

Weight is 3U (84-89g) and grip size is G2 which is equivalent to a Yonex G4 – standard size (apparently Victor have now revised their grip sizings to bring into line with Yonex). All top-end Victor racquets arrive unstrung, so this particular model was strung by the retailer at 23lbs (their chosen tension for all demo rackets) in Victor VS850.

Being a fan of head heavy racquets I was expecting great things from this racket. The combination of Bravesword technology and some weight in the head worked really well indeed. Swing speed is considerably quicker which of course makes for easy clears. The flex in the shaft is noticeable and I can’t help thinking that whilst this works really well in delivering the power in this racket, a stiffer version could be even better.

Because the Bravesword frame is so aerodynamic, there’s no noticeable drag in the shot which is useful in delivering fast, penetrating clears or deft drop shots. The touch is superb and racquet face feels pretty solid which therefore delivers accurate, consistent results.

There’s no doubt that this brilliant combination of head heavy aerodynamic frame delivers in the power department. Whilst I didn’t hit my hardest smashes with this racquet, I used less effort, allowing the racquet to work hard. This meant I wasn’t as tired. There are a number of head heavy racquets that I’ve tested which would not wield the same results and fatigue sets in very quickly.

Defensively this racquet was easy to use. Again, the air resistance qualities of the head made the racquet easy to manoeuvre and the weight in the head did not counter this speed. In fact, the combination worked very well indeed as I felt there was some meat behind drive returns or lifts.

If anything, and I’m being picky, I would have preferred a stiffer shaft to improve responsiveness as I felt the shaft was quite whippy. For some, this will be ideal so I am really talking personal preference rather than saying something detrimental about the racquet.

Considering Lee Yong Dae is renowned for his amazing net play, I expected this racquet to show me something pretty special in this area of the court. The racquet wasn’t as fast as I expected, bearing in mind the quick frame I’ve mentioned on several occasions in this review. The weight in the head  provided a good, solid feel with nice crisp net kills, but I had to work hard, as in some respects the weight, combined with this shaft was working against me. This is where I expect Bravesword 12 will excel compared to this racquet.

The racquet still performed better than some of the other head heavy racquets I’ve tested, and just proves that when you can perform magic around the net, it’s the player and not the racquet that is the star.

Overall I am very impressed with Bravesword Lee Yong Dae. For me I would set aside that this is a signature racquet and enjoy it for what it is, an excellent, fast head-heavy racquet.

RRP is around £130 and the online retailers will no doubt be discounting around £100 mark which is excellent value for such a top-rated racquet.

This should be on every players short-list of go-to racquets if they like head heavy racquets and require more speed from the frame. I’d also add to this by inviting those players who enjoy even-balance racquets to give it a test too.

I’m a huge fan of Bravesword series and this racquet is a welcome addition to the range, which in my opinion is not big enough. The good news is that there are more Bravesword racquets being added to the range in 2013 so we may have something good to celebrate afterall.

As I write this review Lee Yong Dae has switched racquets, now preferring Bravesword 12. I said earlier, put aside the signature and enjoy the racquet for what it is.

I’ll rate this a four star racquet on the basis that it does a lot of things very well. It needs to be a touch livelier in the net area but aside from that, it’s a beauty. The combination works well but I just wonder how good this racquet could be if it was stiffer…