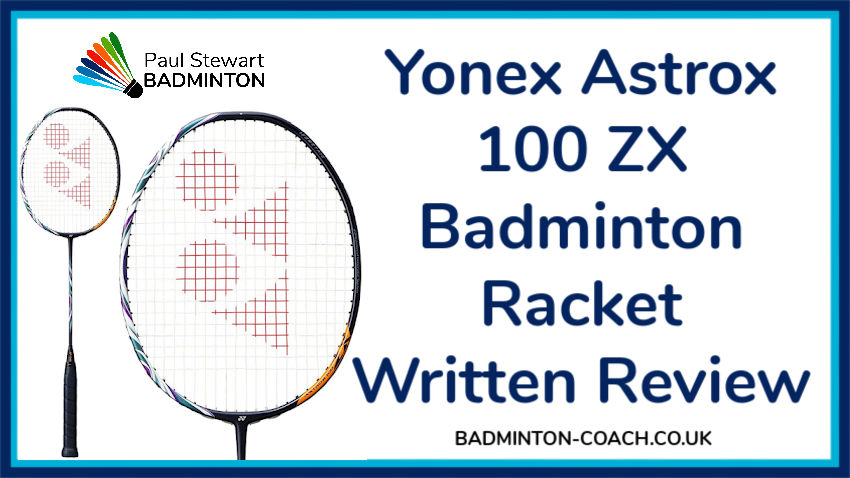 The Yonex Astrox 100 ZX badminton racket was launched in March 2020.

In my review of Astrox 100 ZZ, I provided some background to the Astrox range of rackets, the head heavy powerhouse of the current Yonex line up.

The launch of Astrox 100’s in both guises (ZZ & ZX) has been overshadowed by the world health concerns, resulting in world-wide lockdown and an end to sport in many countries. It’s a shame because the rackets deserved to be introduced with a fanfare and a standing ovation. Instead they have been met with little press and little desire, as more pressing matters at home took over.

With the latest Government announcement signalling the possible opening of sports centres in the UK, and a staged return to sport over the next month or so, it feels timely to complete this review and hopefully whet your appetites to badminton once again.

The Astrox 100 ZX is a beautiful matt navy coloured racket with teal, purply blue and white decals on one side of the frame which are repeated on the super-thin shaft, together with an orange flash towards the throat on the other side of the frame. I did not receive a cover but the standard Astrox is normally supplied with the racket.

According to the Yonex chart, Astrox 100 is an extra stiff head heavy badminton racket. This is usually my favoured specification, so I am hopeful that this racket delivers.

Both 100’s also have a new shape isometric head and that is possibly contributing to the difference in feel to other rackets in the range.

There’s a distinct difference in feel with Astrox 100 and then subtle shifts again between both versions. Whereas ZZ has the solid core shaft, ZX has the more traditional hollow shaft, which therefore provides a more familiar feel in flex and kick after the strike of the shuttle. Additionally, the head is a shade lighter in weight which makes for a touch faster delivery.

As with 100 ZZ, it’s great to hit with a high-end Yonex racket with a G5 grip. I understand there will be two versions of this racket in the UK, so the slightly larger G4 grip will be offered with the 3U version. That should please more players. 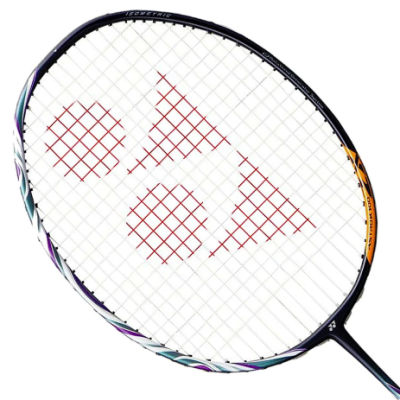 The feel on the stringbed is similar to ZZ and barring the slight difference in weight, you’d be hard pressed to gauge why. There is a different T joint in ZZ and I was informed the head was made in Taiwan and married to a Japanese-made shaft, but I have not had that confirmed. So, in my book, ZX just feels a shade lighter in weight.

With the more familiar feeling ZX I set about my standard test beginning with clears. There’s great movement through the air, very good power and, as expected, the overall feel was more akin to a standard frame. I loved the power, and there’s no issue with accuracy. With these rackets, it could also be worth dropping tension by a pound of two, it’s worth a test, although this is not to cast questions over the frame. No, this is because there’s a slightly tighter feel on the stringbed and therefore it may be more advantageous to the player. As always, test.

I had a lot of fun practicing punch clears with ZX testing how little I needed in the swing to execute a decent shot. Occasionally, I was short on length but that was purely me trying to dial in the right amount of weight into the shot and getting more accustomed to the racket having used the ZZ for so long.

Moving swiftly on to drop shots. Being similar to ZZ, it’s no surprise that the ZX delivered in abundance, whether hitting fast, slow, slice, reverse slice, or push drops. There’s a sharpness with this frame that I loved, just as I did with ZZ.

Smash power was really good, although not quite as good a feel as with ZZ. I think I preferred the feel of the solid core shaft, but as there is a noticeable difference in price, I’m really happy with the angle and power ZX delivers. There could be a more in the 3U version although I cannot see the head weight being any different. Apart from that, let’s keep this positive because ZX deserves its own place on the mantle rather than as a little brother to ZZ. It’s punchy, it’s quick and I like it.

As we moved into mid-court hitting, this racket continued to shine. Flat drives needed a little more work but once you’ve dialed in the work:feel ratio, it’s plain sailing. The head moved faster than Astrox 100 ZZ, but comparing the two, I needed to put slightly more effort into the shot.

I love testing a rackets manoeuvrability in defence. Fast exchanges from/to the net demonstrated Astrox 100 ZX is quick to manoeuvre and the slightly lighter head is so fast. This must be one of the most aerodynamic frames Yonex has produced for years.

Those difficult shots off the hip carried a strength to them that I expect from a top level racket and I loved the response when there was little preparation time resulting in short punchy shots.

Just like Astrox 100 ZZ, I can’t fault the Astrox 100 ZX in manoeuvrability around the net. There’s so much touch and control which is needed in this area. The easy handling allows for fast change from under the net to over the net shots, or quick change and shuttles are heading for the floor with great angles. I’m truly loving this racket.

Astrox 100 ZX has the same new shape ferrule which feels really comfortable with an increased flatter area for those players that grip up the handle for net play and serving. This will be a popular addition for many.

Astrox 100 ZX is a triumph. For those who like the real head heavy beasts, it may feel a touch too light, but for me it’s a beauty.

As with it’s big brother Astrox 100 ZZ, this is a racket that is just brilliant no matter where you are on court. It’s fast, powerful, quick to manoeuvre, highly responsive and feels great too.

The initial dilemma for players is which racket to select between ZZ and ZX. But, with a significant price variation of around £50, I suspect ZX may well steal the crown of best seller from ZZ. If possible, I suggest you test both and see if you feel evough of a difference to spend the extra £50, the more discerning player probably will. But for many, the cheaper ZX will become a star in their bag.

RRP is unknown as I write this review and retailers are simply quoting retail price of around £160 which is a large price tag for any racket. However, Astrox 100 is a extraordinary in my opinion and it’s rare that I say that about any racket, irrespective of brand. Test both versions of the Astrox 100 model and in both weights if you can.

My sincere thanks to Yonex UK for the loan of the racket. Receiving a racket weeks before launch is a first and I feel honoured to be trusted to test early. Of course, if it wasn’t for the worldwide crisis, this review would have gone live in March, but I felt it was unfair to do so, with our focus shifting to Covid-19.

I’ve had time to think long and hard about my rating for Astrox 100 ZX. It’s a very close second to Astrox 100 ZZ in my opinion, and that’s because I’m completely hooked on the feel of the big brother. That said, the cheaper price will be more alluring and it’s a hair’s width away from stealing the ZZ crown.

For many, Astrox 100 ZX will win the day and I can’t say I’d be surprised. Weighing this up, I’ve wrestled with myself and settled upon a 5 star silver award for Astrox 100 ZX (although to be honest, it is only a smidgen away from Gold).

It’s a beauty and I hope you love it as much as I do!