We had 18 players of varying standards on the course, my assistant coach Ian, and my wife Angie who took care of all the admin and made my life so easy.

A big thanks must go to Ian for doing such a brilliant coaching job and an apology for missing out my thanks to him and all he achieved with the players during my final presentation. I look forward to working with him again in the future.

I also need to thank my sponsors Yonex for donating some excellent prizes. I am so pleased I chose Yonex Aerosensa 40 shuttles for the weekend – the players really apprecaited using such quality shuttles! 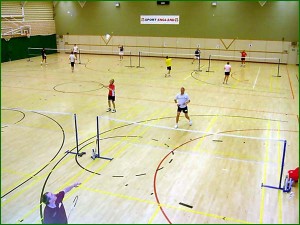 This was a very busy program covering so many aspects of skill from attacking clears, backhand, to a multitude of hand skills around the net. Players were on court 6 hours a day and we had the luxury of using 8 courts which gave us plenty of court availability for games and some one-on-one coaching.

If I had to give out a prize for quote of the weekend Rich would easily win. Having just completed a rather difficult drill with me, all he could say was ****ing hell! Thanks Rich.

I was surprised and delighted at the attendance of the tactics and strategy video session held on Saturday night and even more surprised how few remained in the bar after we finished the session!

It was important to remember that badminton is a fun game. To lighten things up at times there were a few fun competitions with prizes for the winners and a lot of conditioned games.

Sadly, we had one major injury during the weekend, resulting in a trip to hospital. Our thoughts go out to Raj who despite properly warming up, ruptured his Achilles tendon playing a game during a break. Hopefully the surgery will be a success and we will see him on court again in the future.

Having been to Lilleshall a number of times, it was a pleasure to return and run my own badminton course – fulfilling a life time ambition. At the end of the weekend, during my final presentation with the players it dawned on me what we had just accomplished and it nearly became an embarrassing emotional moment! So thank you to everyone for helping me realise one of my ambitions!

Many thanks to all the players who attended. You worked really hard over the weekend. I really enjoyed working with you all, and was so touched by your comments at the end. I’m so pleased that you felt that we got it right in so many ways, delivering quality coaching at a pace that wasn’t too onerous.

You don’t need to take my word for it, here’s just a few of the comments already received…

Fantastic Weekend Paul! Can’t wait for the next one.
Giles Button (via Facebook) 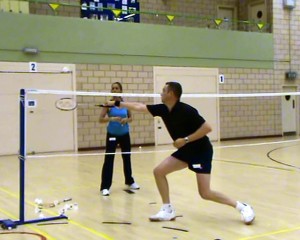 I wanted to write and thank you for the weekend coaching course at Lilleshall in September. It may have been your first course but the organisation, the thought to detail and the breadth of what was covered certainly made it seem as though this was a regular event that you have been running for a while.

A couple of things stood out for me that I wanted to mention. Firstly, I was concerned that my level of playing ability may not be good enough to benefit from your coaching and that I may prove more of a hindrance than anything. I was delighted to receive your email and subsequent conversations before the event Paul – you obviously picked up on my worries and worked with me to sort out what was best for me to make sure I would benefit from the weekend.

Secondly, everyone I spoke to during the weekend all felt the same thing – that they were being pushed and encouraged to improve at a level to suit their own individual ability and not ‘lumped’ into any specific category and taught as part of a group – even though we were in groups! That you and Ian were able to assess and constantly juggle your tuition for all of us in such a way over the two days was most impressive and much appreciated.

I have come away from this course with new skills, an understanding of what shots to play, when and how and a better understanding of many aspects of the game beyond just hitting a shuttle.

Although I sincerely doubt I shall ever bother the sports pundits into dreaming up sensational headlines of how a 47 year old with dodgy knees suddenly became World Champion overnight, I am confident that I am about to unleash a whirlwind of new things into my club that will have it spinning for a good few months!

Paul – my thanks to you and Ian for some excellent, considered coaching and the company of fellow badminton fanatics over a weekend and to Angie too for organising such a seamless, uncomplicated stay.

I look forward to seeing you on a future course!
Rufus Steele

Like to send my thanks to you, Angie and Ian, I really enjoyed the weekend and learnt loads, the whole weekend was organised very well , credit to all three of you.

My children were very impressed that I won a prize, I think they thought I was too old to get prizes!

I really enjoyed the net doubles tournament that you arranged, choosing people to play together, it brought in a lot of the coaching that we had taken part in and gave a realization of how effetive it is to play well at the net, which I must say is a major part of my game as mixed doubles is my main game that I play at club level.
Lynne Short