I recently reviewed the newly launched, top-of-the-range Yonex Nanoray 800 badminton racquet. Whilst a little disappointed with that racquet, I am looking forward to reviewing Nanoray 600, which falls around the upper-mid point in the range.

The racquet is a 4U (81-85g) weight and grip size G4 – the standard grip size offered from Yonex these days. This is a light-headed racquet with a flexible shaft. The racquet is strung reasonably tight with Yonex BG65Ti string.

This is a very striking racquet with great graphics in red, white, gold and black. The standard full cover accompanies the racquet.

There is one unusual feature on this racquet that was first seen on Nanospeed 6600. At the top of the ferrule is a rubber insert. I’m not really sure what benefit this presents, maybe it’s something to do with the flexibility of the shaft to dampen vibration? Perhaps it’s just a marketing gimmick?

As usual the racquet was tested straight out of the bag, except for an additional layer of Yonex Grap which is a particular favourite of mine.

With thoughts of Nanoray 800 performance I was pleasantly surprised how much Nanoray 600 differed in terms of feel and play. The flexible shaft really helps this racquet. Timing wasn’t an issue, despite me usually playing with stiff shafted, head heavy racquets.

In fact, I really enjoyed testing Nanoray 600. It delivered more power than 800, thank you! Clears were crisp and easy and the head responded very well indeed, although I still prefer to feel the weight for extra control. So far good marks here.

Drops shots played very similar to 800, nice and crisp and tight, with very little drag. The lighter head allows you to clip the shuttle much quicker which adds to the deception if playing specific types of drop shot – very nice. 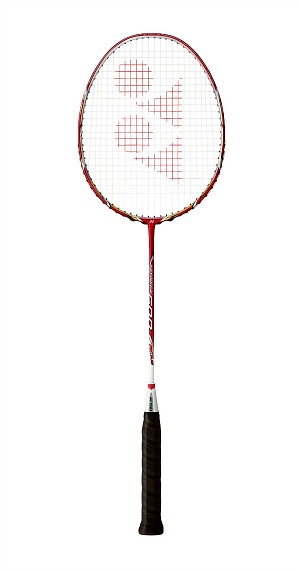 Unlike 800, this racquet offers a lot more power which was pleasing. Granted I don’t hit the shuttle as hard compared to using VT80, but I was pleased with the result. In my opinion, head light racquets best suit those players with natural power. These type of players generate terrific racquet speed and therefore do not require head weight to increase the force of their smash. The dilemma here is that a naturally powerful player would generally prefer a stiffer shaft. So, in essence the Nanoray 600 sits somewhere in the middle.

My fellow reviewer Mark also tested the racquet. He is naturally more powerful than me and he really liked it. Again, his preferences for racquets are different but he commented positively on the power and control Nanoray 600 provided.

Defensively Nanoray 600 performed very well indeed. This was expected, and the extra whippiness from the flexible shaft was interesting although wasn’t as solid in the hit as 800. I didn’t notice this in the smash because I was more focussed on the power, but have to admit when I re-tested it was there although wasn’t  a big issue. Overall, a head light racquet is easy to defend with and 600 certainly shone.

There really were no surprises in terms of performance around the net. It was solid, fast, accurate and I could have played at the net for hours without feeling tired. And, that’s without the added benefit of a re-string to my preferred tension. However, this is where I would have preferred a stiffer shaft to ensure there is a faster response from the racquet. But being light headed Nanoray 600 is still pretty fast at the net.

Overall this is a very nice racquet and could suit a player who is a good counter-hitter, although I generally do not recommend a defensive style for winning games. But in league badminton this exists and for a player who is lacking in power and needs a fast racquet, the Nanoray 600 would certainly be on the wish list.

RRP on the Yonex Nanoray 600 Badminton Racquet is a surprising £150, however you will find online retailers offering closer to £110 which is still a lot of money. For what it is, I do feel this is over-priced especially since there are so many alternatives in the range that are close in performance.

So how do I rate this racquet? In many respects I felt it performed better than it’s big brother 800 and its quite a lot cheaper. Based on the overall performance I consider a 4 star rating for Nanoray 600 to be fair. It’s not quite got enough to take it to a higher rating but there is plenty to comfortably make 4 stars compared to 800 which only just made it.