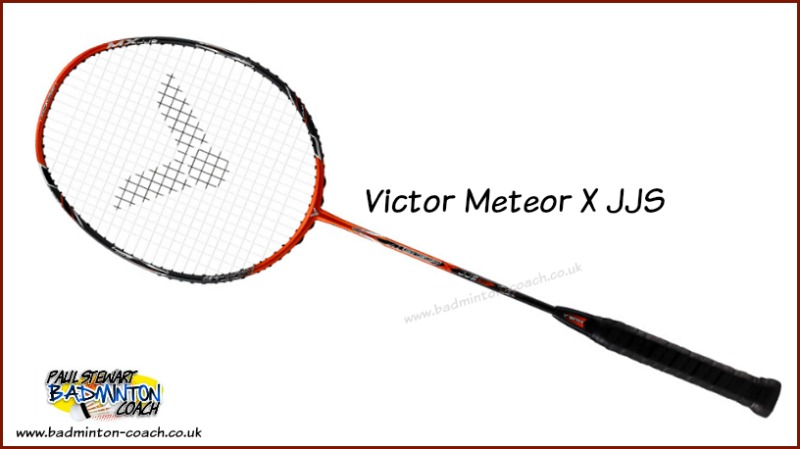 His signature racquet was launched in Asia and then we waited and waited and waited until it finally arrived in Europe. The delays were caused by composition naming reasons which took some time to resolve. This was also at a time when there was speculation of the arrival of Meteor 90 so this racquet was a bit of a surprise, especially as the player was retiring.

Generally I’m not a fan of signature racquets because they tend to be made for sales rather than carry the flag as stand alone racquets worthy of mention and purchase. However, Victor seem to have got this right as each of their signature racquets so far have been extremely good, great value for money and worth putting on your must try list. Let’s see if MX JJS can do the same…

MX JJS arrived in a high quality black and red full length racquet cover with the players signature and name at the centre.

As usual, all top-end Victor racquets arrive unstrung. As this is my demonstrator model I strung it to 25lbs although maximum tension is stated at 28lbs. Whilst the pros have theirs strung beyond this, a demonstrator should be strung for the league player and their requirements.

Markings suggest this is a 3U (85-89g)– G4 grip size together with 4-5 for head weight and 4-5 shaft flexibility, which means JJS has a medium stiff  shaft and is pretty head heavy.

Having tested and reviewed other racquets in Meteor family, the JJS was relatively familiar in terms of feel which is more solid than a Bravesword although perhaps not as fast. It‘s a very striking looking racquet, predominantly orange in colour with black  and silver decals. The shaft also carries the signature of Jung Jae Sung.

Having recently tested Thruster 8000, and had a fair amount of play with Bravesword LHI, I really wasn’t prepared for what I discovered with Meteor Jung Jae Sung. The head doesn’t feel as if it’s carrying the same weight as Thruster although falls into the same specification and yet is more solid feeling compared to BS LHI.

This badminton racquet could almost be seen as a blend of these two racquets although leaning more towards Thruster. For some reason, it has got something else that’s good although I can’t quite understand what it is.

The feel of the racquet in the clear is crisp and powerful. You notice there is weight in the head but it’s a more overall solid feel rather than a tip of the head, leading the racquet kind of weight. This provides both precision and power in a combination I haven’t felt for some time which is really nice. The medium stiff shaft helps deliver all that is required with perfect timing.

There’s no sense of drag or timing issues here. The shot stays true and even off centre shots remained on target.

Drop shots were again nice and crisp and sharp which is how I like them. There’s enough in the head to really throw in a slice without it feeling as though you’re pulling your arm or placing too much strain on your wrist.

Onto the smash and this is where I was caught out. I wasn’t expecting too much from MX JJS before I went on court. However this racquet delivered more powerful smashes than BS LHI which was a real shock for me. And, the smashes seemed to go down easier with less effort. Before moving onto defence I re-tested both Thruster 8000 and Bravesword LHI and surprisingly, for me Meteor JJS came out tops in terms of smash power – I wouldn’t have believed it if I hadn’t tested it for myself.

Defensively JJS was quicker than Thruster 8000 and moved extremely well. It’s not quite got the speed of a Bravesword but it’s still very quick. Fast flat rallies were fun as it handled them with ease and returning smashes was a joy allowing me to sit back and decide what I wanted to do with the shuttle.  The responsiveness of the shuttle off the racquet face was superb with plenty of control which allowed me the luxury of blocking with the smallest of movements rather than having to push through more.

Around the net MXJJS plays really well. It’s fast and yet solid enough but not unwieldy in any way. I’ll agree is a touch slower than a Bravesword but I can live with that because it still delivers fast enough. I seemed to get an even better, more positive connection with this racquet compared to others and I still can’t explain why.

We spent some time testing return of serve and there’s plenty of touch here. It sends those mid court pushes into play so smoothly and yet will happily clip the shuttle to drop into onto the net. A little finger power and it’s easy to punch the shuttle into the corners or down the centre at opponents. 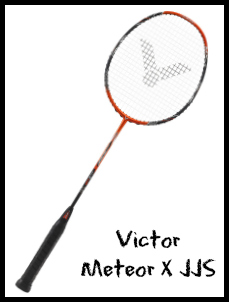 Before I sum up my thoughts on Meteor JJS I think I need to make a statement or two. Players reading this may draw the conclusion that as I have moved sponsors to Victor, my racquet reviews are coloured to favour my sponsor. So I’ll state for the record that my blog has no bearing on my sponsorship arrangements and I remain 100% in control of what I say and which products I review.

Most readers know by now I review products which are provided for me and will happily review other manufacturers products too. Each racquet is viewed impartially and if I consider a racquet isn’t that good then I will say so. If I allow sponsorship to dictate my scores then my reviews become a complete waste of time and that won’t happen.

Meteor Jung Jae Sung is an exceptional racquet that possesses something extra but I’m not sure what. Its playability was beyond what I expected having tested other Meteors and has provided me with a huge dilemma in terms of my racquet of choice for the season.

I know players who use Meteor 60 and all of them have said how much they enjoy the racquet and do not look forward to the day they have to change. I now understand why they say this. Since I tested this racquet I really can’t wait to play with it again – very strange.

RRP is around £170 which is pretty good for a top of the range racquet. Online retailers are discounting to around £120 which is extremely good and at these prices well worth a test. To be honest I highly recommend you test the racquet anyway if the specifications are similar to your personal preferences.

If head heavy racquets are not your cup of tea I would give MX JJS a fair chance. On reflection, because the weight isn’t at the top of the head it doesn’t feel like a head heavy racquet. It, just came to me, this racquet has some of the magic that I first discovered on Yonex Armortec 900 T. It’s that something you can’t explain but makes you want to pick up the racquet and play. So it must be something about the distribution of weight in the head that just works so well.

No doubt you can tell I’ve gotten smitten with Meteor JJS and it’s  surprised me. I really can’t find any faults with it or areas I’d like to change. It does everything to an extremely high standard and that’s what I look for in a racquet. Despite the fact that some players may criticise me for this review I am going to stick to my beliefs and give MX JJS a 5 star rating.

Keep watching www.victor-sport.co.uk for information where you can test Meteor Jung Jae Sung badminton racquet and other Victor racquets.