Having already posted my views from 11th March, I think it’s only fitting to highlight some of the finer points of these championships from my visit on 12th and 13th March. Sadly I wasn’t able to go to the finals this year but will comment briefly on them. 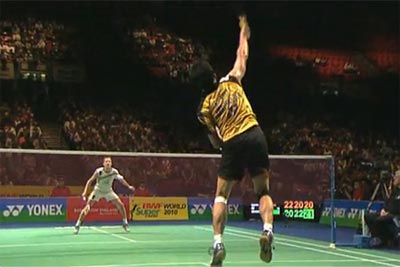 There were so many great games to watch. Peter Gade versus Taufik Hidayat. A fantastic display of singles with Taufik looking to be in the driving seat. The quality of net play was astonishing. Major hint here – the net area is a vital strategic position to hold. Being poor in this area will cost you dearly. It was a shame that almost the last point in this match was lost on a poor line call against Taufik although Gade had one called against him only moments before which was on the line. Some would say that’s justice.

What was a little sad about this match was that it’s probably the last chance we’ll get to see these two badminton greats in action in Birmingham. I don’t believe Gade or Hidayat will be playing this tournament next year.

The singles sensation for me was unseeded Kenichi Tago from Japan. His win over Persson from Denmark on 11th was unexpected, but he played so well. And then he outplays the great Chen Jin from China in a mammoth 3 game match. Absolute quality and certainly one of the performances of the tournament. His overall court coverage was superb, lovely net play and a jump smash with his Z Slash was awesome. His showed a remarkable level of fitness to win in 3 games again.

Lee Chong Wei displayed a level of quality which I’ve rarely seen in him. Consistency was superb and this time he had the patience and determination to stick to his game plan (another hint, you need one of these to win).

Let’s not forget the other big shock of the tournament. Lin Dan lost to Bao Chunlai in a 3 game match. We all thought it was a set up with Chunlai winning the first game, Lin Dan levelling it and then we expected a close third with Lin Dan winning. Even on match point we thought Lin Dan would win – such was our belief that the great Lin Dan would be in the final. But Lin Dan was struggling coping with the height of Chunlai and the angles he was hitting from his overhead smashes and drop shots. Chunlai seemed to find ways to expose Lin Dan’s backhand more than anyone I’ve seen before. I’m sure the constant changing of pace was a deciding factor here.

In mixed doubles we saw both British pairs falling. Robertson, as usual, had something to say about losing although he did have a point about the line call on this occasion. That said, his constant taking time in between rallies was a joke. Yes, lots of players were doing it, but he and Wallwork were milking it. The almost blatant ignoring of the umpire was a disgrace and I hope umpires are given the authority to stamp this out. What happenend to the “play must be continuous” rule?

Onto Clarke and Olver. Personally, I believe Clarke is one of the most skillful players in the world today. Sadly his fitness does not match his skill. Also, I feel he got the short end of the stick in getting Olver as a partner and he should have been given Wallwork. That was a timing issue more than anything as Gail Emms retired before Kellogg. Olver has promise although no court presence yet. I also believe Clarke is trying to take too much of the action to cover for Olver which is leaving gaps for opponents to exploit. I wish them well as a pair and hope Olver blossoms with experience. This tournament certainly will help her develop. 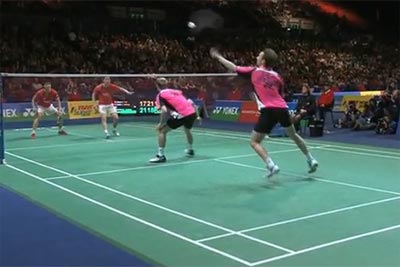 Onto mens doubles. The best two matches featured the Danes. The big win had to be Boe and Mogenson against Cai Yun and Fu Haifeng. Not only a brilliant match, but possibly the Danes greatest performance. Cai Yun was so mad at losing he threw his racket into the ceiling, landing somewhere in the audience and then kicked his bag and rackets – not very sporting!

Paaske and Rasmussen also provided us with a brilliant match Malaysia’s Gan Tek Chai and Tan Bin Shen. This was tactics mastery at its best! Nobody gave the Danes much chance although acknowledged their experience. Having beaten the No 1 seeds in first round, something special was happening here – we just didn’t know what at the time.

Whilst I’m not commenting much on ladies singles, doubles and mixed here, I have to say that the matches were superb, fantastic play, breathtaking reflexes and very long rallies. I finally got to see Juliane Schenk on court. She was playing India’s Saina Nehwal. Nehwal was just too strong for Schenk on this occasion and I must confess I thought that Schenk seemed to run out of ideas and steam against this relentless machine of clears and drops.

Usually semi fnals give us the best games of the tournament but not on this occasion.

Lee Chong Wei disposed on Gade in two games which I think most people would have predicted. The big upset in singles was Japan’s Tago beating Lin Dan’s victor Bao Chunlai. Another fantastic game and a deserved place in the final for this tenacious Japanese dynamite.

Tine Rasmussen demonstrated supreme confidence and a better fighting spirit this year to win her place in the final. Yet again I watched Chinese ladies singles and doubles play it out to the end with most matches going to 3 games. The Chinese could not be challenged about match fixing having watched the matches this year, otherwise I’m sure results would have been different. 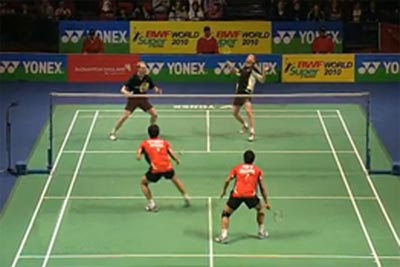 The scrappy match of the day had to be Paaske and Rasmussen versus Setiawan and Kido. An easy first game for the Indonesians and seemingly moving easily towards a place in the final. Suddenly Kido was called for a service fault and then a second. This completely changed the match and the experienced Danes came back from a huge deficit to take the second game, mainly from mistakes from Kido. This continued in the third game with Kido only showing flashes of brilliance. The Danes played another superb tactical game and deserved to win, albeit marginally. Setiawan played outstanding badminton showing why he is such a fantastic tactician and mover of the shuttle. The angles he found on that court were amazing.

I missed the other mens doubles between Boe and Mogenson and Lee and Jung. I heard Lee had a very heavily strapped arm which may have accounted for their demise. Not taking anything away from the Danes who I thought had been superb in the tournament and are fast becoming favourites of mine.

I wasn’t able to go to the finals this year and couldn’t watch on TV so my comments will be brief. 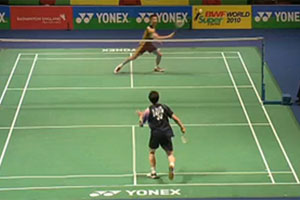 I expected Lee Chong Wei to win and I’m delighted the scoreline reflected a good final. Tago has been my big find in this tournament and I hope he wins one of the big Super Series Events this year – he deserves to if he retains this form.

I’m thrilled for Tine Rasmussen to come back from injury to win this tournament. There seems to be so little threat to Chinese dominance at the moment so this really was a great win. I do wonder what would have happened if her opponent Wang Yihan, hadn’t had such a tough semi final against a fellow Chinese. It was nice that this repeat final went the other way this year in the Danes favour.

Ladies Doubles – who can stop the awesome Du Jing and Yu Yang? They are an absolute delight to watch. Their overall game is too strong for most ladies combinations at the moment. Fantastic pair to watch! Thank you ladies for continuing to show us all how good ladies doubles can be.

In mixed doubles there was another shock. Most of us expected Widianto and Natsir to overcome the new super Chinese pair of Zhang and Zhao bearing in mind their titles won to date and experience of playing and winning big tournament. But the Chinese pair played an outstanding game to come out on top.

Last, but by no means least was the all Danish mens doubles. A thiller and fitting end to this Centenery All England. Very few would have bet on the eventual winners Paaske and Rasmussen. I think Boe and Mogenson peaked too early in their win over Cai Yun and Fu Haifeng. The older Danes have weathered this tournament incredibly well and that’s what makes champions.

Congratulations to all finalists and winners. These have probably been some of the best finals in years with all but mens singles going to 3 games.

For me, I came away from Birmingham with a lot of ideas to help improve the players I work with. The big reminders for me were the following:

2) Play around the net is getting tighter every year

3) If you want to win in doubles, learn to defend

4) Even a big gun smash will be returned easily. Smashes are a tactical move to get a weaker response.

5) You’ve got to be mentally strong to succeed as the pressure to win a point gets harder. You’ve also got to understand tactics to win.

That’s it for this year. I hope you enjoyed my review of the tournament – one of the best I’ve even been to.