7 Common Causes of a Poor Badminton Backhand Clear and How To Correct Them.

The most common badminton coaching question I’m asked by players is “how can I improve my backhand?”

After studying badminton players on court and on video, there are a number of common faults emerging that can be corrected relatively easily.

Before I run through the various faults and tips to improve, please check you are playing with the correct speed of shuttle. If you’re not sure, refer to my video and article on the subject. Without doubt, if you are playing with slow shuttles, it’s most likely you’ve developed all sorts of bad habits to hit a decent length whether on your forehand or backhand. In fact, I’ll wager you’ve almost given up on ever hitting a decent backhand clear if you’re playing with slow shuttles. So get your shuttle speed right first!

1)      Incorrect grip. Perhaps the most basic and yet often neglected skill is changing grip. Badminton is played at a faster pace now and therefore it is imperative that basic skills are mastered in order to cope with this change of pace. The only time you could get away with using a forehand grip of sorts, is when the shuttle has already travelled behind you. Then, and only then will a forehand grip present the racket face properly to the shuttle in order to play this shot, although it is extremely difficult.

Tip No1. Practice grip changing whenever you can. It’s a simple thing that can be done whilst watching TV. Refer to my video “Armchair Exercises” to see how simple this is. Make sure you watch your hands initially to check you are holding the racket correctly. Also, practice the bevel grip which is basically a forehand grip but you move your thumb onto the short side if the grip rather than on the larger flat area (almost 10 2 position if you think of your grip like a clock face).

2)      Incorrect footwork. In order to hit any power shot, you need to be positioned correctly. With the backhand, moreso than forehand, your feet need to be firmly on the floor to provide a solid base. That doesn’t mean this shot cannot be played whilst in mid-air as the pros can hit the clear from this way. But, for the majority of players having both feet on the ground is essential to generating the power required to hit a decent backhand clear.

Tip No2. Many players stand with their feet parallel when trying to hit the backhand clear. This isn’t the best position for your feet as it’s not the most balanced. Ideally, you need to move your racket leg a step towards the rear court so you’re almost in a standing lunge position. This provides greater balance and a more solid platform to hit from.

3)      Body position. Whenever I study players with poor backhands, most are so afraid of the bad results they expect to get on their backhand, they fail to prepare properly to hit the shot. After moving towards the backhand, they step to the side and only partially turn the shoulders to hit the shot. This means the racket is starting from the wrong position and following an incorrect path towards the shuttle – an in-to-out path. Unless you’re extremely lucky, the path of the racket will always be different to the direction you wish the shuttle to go. That’s almost like trying to hit a nail into the wall when the starting position and path of the hammer is at one side of the nail – almost impossible to hit straight.

Tip No3. So, you’ve moved to the shuttle and planted your foot. Great! Now turn your body so your back is virtually parallel to the net. Now you’re ready to hit the shuttle as your racket is in the correct zone and flight path towards the shuttle.

4)      Position of the shuttle. To hit a good clear, the shuttle should be struck when it’s in line with your body. If the shuttle is in front of you i.e. closer to the net, then in reality you have the time to hit a round-the-head shot. The majority of errors I see are due to the shuttle being struck from behind the body – the most difficult of shots to master.

Tip No4. Ask your partner to feed a few shuttles into your backhand hitting zone. Move to the shuttle as though you are going to hit your backhand clear. Now, let the shuttle fall to the floor and notice the landing position. Where is it in relation to your body? Repeat 5 times to check for consistency. Is the shuttle landing in the same place? If so, you know how you need to change your positioning in order to be in the right place. Make adjustments and repeat the exercise. It may feel strange but that’s good. Now ask the feeder to lift again and hit a few shuttles. Stop every few and allow the shuttle to hit the floor to check you’re still in the correct position. 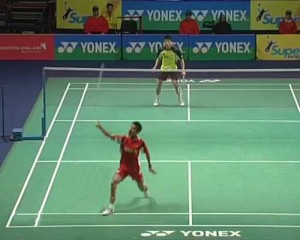 5)      Hitting action. There are a number of common hitting faults. If you allow the shoulder to lead, effectively you are turning your body before the hit. This means you change the path your racket must take to connect to the shuttle and generally you end up with an in-to-out action. Another simple mistake here is throwing the whole arm at the shuttle with a big follow through. There is no power or direction in this technique and the clear will always be weak.

Tip No5 Did you ever flick a towel when you were in school? Remember, it was the pull-back action which generated the power. If you simply flicked your towel without this action, not much happened.

This is the type of power hitting action you need with the backhand clear.

6)      Recovery. No matter what shot you are playing and where you are on court, it is essential that you hit and move. It’s amazing when you watch players how many times they are admiring their shot whilst stationary, rather than hitting, watching and moving. If you don’t recover from the shot, you won’t be in a good position to cover a possible return. The danger here is that some players try to push off from their racket leg whilst playing the shot, which completely changes the path of the racket.

Tip No6. Make sure that as soon as you hit the backhand clear, you move to your base. A simple exercise here is to do a count of: hit, 2, 3. By the time you count 3 you must be on your base. As you move, you can still watch the shuttle. It is possible to watch and move at the same time! Use this technique with all shots and you will get faster on court. It’ll also prove how much you’ve been shuttle watching and wasting time!

7)      Tension. Perhaps the biggest cause of weakness in any power shot is the amount of tension in your body and racket arm. It’s impossible for your muscles to work efficiently and effectively when you’re too tense.

Tip No7. Focus on holding your racket really gently – just enough that it cannot slip out of your hand. Play a few shots on court to get the feel. You’ll probably feel very different. Only tighten your grip a fraction before impact and then loosen again. Once you get comfortable with this, try hitting your backhand clears. You should find you have more power.

If you’ve developed a style over the years that incorporates some or all of these faults, then you can, in time, correct them. But, please be patient. If this is the case, focus on tips 1 and 7 first because they will give you the greatest improvement in the fastest time, especially tip number 7. After that, it’s best to follow in sequence because that’s the sequence of the stroke cycle – move, prepare, hit, recover.

As always, have fun and let me know how your backhand is improving as a result of this article.