A Badminton Stringers Tale from All England Badminton Championships 2014 – Part2 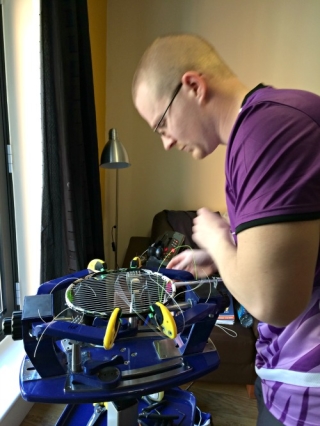 In my tale so far we’ve travelled to Birmingham, set up base camp, scratched our heads over our missing and re-appearing sign without stringing too many badminton rackets.

I left Birmingham on Tuesday afternoon for an evening engagement. Whilst at home I received a text from Mark enquiring whether some of the Chinese Taipei players could use our washing machine… not a problem, happy to help.

Arriving at base camp on Wednesday morning I see Mark’s had a relatively quiet time aside from stringing Shin Baek Choel’s five Victor TK9000 rackets the previous day. This gave him plenty of time to devour his digestive biscuits and another loaf of bread.

Getting desperate, Mark & Ben set out to find a local store and they soon arrived back laden with 5 loaves of bread, packs of cheese slices and Jelly Babies from Tesco’s. Yes, the quest to find Tesco’s was finally over – Mark was now a happy man!

And the day got better…

Vicky soon arrived with two Chinese Taipei players with bags of clothes for washing. I watched in amazement as the players loaded their clothes into the machine and then stared at it trying to figure out how it worked. It wasn’t long before we were asked for help, needing washing powder and a translation of washing machine labels. Paul to the rescue on this occasion, as we weren’t sure whether Mark’s obvious cookery skills would extend into other domestic areas!

The good news was that Vicky also brought rackets for stringing – thank goodness! We quickly labelled them and began preparation of the frames.

With the older rackets there was a lot of preparation as it was clear the previous stringers did not have the time or perhaps the inclination to do the best job for the player. The majority of grommets has been turned rather than changed which meant a high percentage were a mess and most likely the cause of string breakage. The grommet heads looked like clock faces.

As soon as one racket was prepared Mark began stringing and I continued the preparation.

My First All England Stringing Job

With all rackets prepped and following a visit from Korean players dropping off a few more, I could finally strung my first racket. 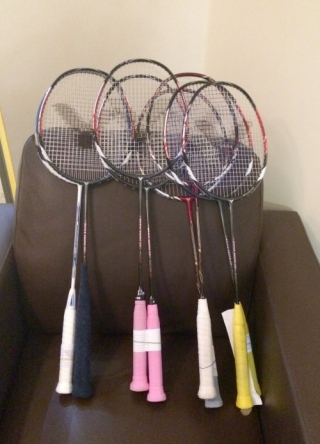 I picked up a couple of well worn Bravesword 12N’s which belonged to Tontowi Ahmad. Yes, my first stringing job and I get the rackets of current World and All England Mixed Doubles Champion – FANTASTIC!

There’s one point that struck me whilst preparing the rackets. None of the players had a custom racket – all were standard models with scratches and paintwork chips. I’d assumed they would be in pristine condition. However, they are working tools and most likely receive most of the scratches due to storage in bags, rubbing against other rackets.

Whilst I was stringing Ahmad’s rackets, Mark was busy stringing Liliana Natsir’s. It was a brand new Bravesword 12 L with a grip size 5. We hadn’t seen one of those before.

Disappointingly, one of Ahmad’s rackets was broken, so I only got to string one. As the Victor stringing machine was new to me, this was going to be a learning experience, understanding its quirks and positive features.

With high tension stringing we’d taken the decision to string bottom up on the cross strings. This is where I met my first test, realising that certain rackets needed to be strung top down. The clamp would not grip the last top string as there was insufficient clearance for the clamp to perform. Neither of us had brought a flying clamp which meant either using a starting clamp or being creative. I chose to be creative and finally clamped the top string and tied off. One racket completed but valuable time wasted in the process. However, good experience.

I’ll share this story with you, and more in Part 3…