Mid February is an important time for me as I finalise preparations for a number of events. This year was particularly heavy as I had four weekends in a row where I as away, commencing with my residential course at Lilleshall, immediately followed by a week at the All Englands. After this was a training weekend in Milton Keynes followed by a nutrition event in Cheltenham.

By mid February I’ve already arranged string deliveries from Victor Europe and posters for the Korean and other Victor-sponsored players so they knew where to find us. Mark was printing the posters.

Having arrived home on Sunday evening from another successful course at Lilleshall, I had to unpack and re-pack, this time being away from Monday morning and arriving home the following Sunday. I’d also taken delivery of string and packed extra, having no idea how many rackets we would be stringing.

With bags, boxes and a stringing machine in the car, I set off at 1.30pm to travel in the wrong direction north to collect Mark and his stringing machine, before turning back and heading to our apartments opposite NIA in Birmingham.

On the journey to Birmingham Mark and I discussed last years All England and how we expected this year to be different. This time my diary was clear and therefore didn’t need to make any additional journeys back home. We discussed the German Open results and whilst Mark had already decided Lee Yong Dae and Yoo Yeon Seong would be in the final, I expressed my concerns as they were playing a rising Danish pair that would be full of confidence having just won the German Open. Sadly my prediction that LYD would have a tough game turned into a nightmare as the pair lost in the first round!

We arrived around 4pm and eventually got to our room. We then found Ben from Victor UK and was disappointed to note we were not allocated adjacent rooms as requested. Another trip and further delays at reception sorting out our rooms eventually resulted in both of us being moved to another block and this time we were just across the stairs from each other which was fine.

Eventually, all our equipment was loaded and set up in our room. By this time it was 5.15. We were told Vicky from Victor Taiwan would arrive around 5.30 so there was no time to visit our local Tescos to purchase food.

Vicky arrived on time and it was so good to see her again. She brought two Jetspeed 10’s from Boonsak Ponsana so Mark and I immediately began stringing. Vicky announced that Malaysia were signing a contract with Victor which shocked me. This meant we were stringing all of the Malaysian players rackets although they were still using Yonex rackets for this tournament. They would however, be wearing Victor clothing. 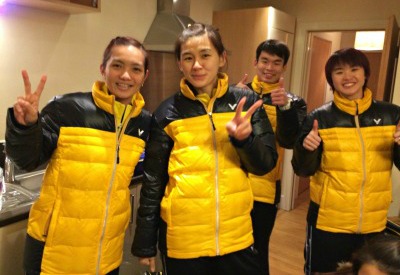 Vicky returned very soon with three Malaysian girls with a bag of rackets. I expressed how happy I was to see these rackets. One of the girls with a great sense of humour then opened another bag full of rackets and asked me if I was still happy! That became the quote of the week!

More rackets arrived. By the time we closed the door at 11.30 we had received 47 rackets. Wow! We restrung 47 rackets all week in 2014 and now we had 47 rackets on the first night. We were excited to see the new Jetspeed 10 in A 3U which is only available to the players, and the new Hypernano 800 – both really nice rackets.

It was a very long night…

With so many rackets, Mark and I decided we would stay up all night and string as many as possible bearing in mind some of the players would be competing on Tuesday and others would be practicing.

I had also contacted Victor Europe and asked for more string to be brought over with Soren who was arriving Tuesday. My instinct told me this was the beginning of something and I had no wish to run out of string even though some of the players would provide sets for their rackets.

Tuesday soon arrived and we had barely stopped. With no room to relax we had continued stringing throughout the night and polished off a great number of rackets. Unlike the Yonex stringing team who string in the stadium, we had to prepare the rackets ourselves and then stencil and record the data. A lot more work than simply string the rackets. That said, we didn’t have the general public watching us and wanting our attention so there is a trade off here.

More rackets arrived throughout Tuesday. It was like a Tsumani of rackets. Just when we thought we were making headway, the Korean players arrived and then Chinese Taipei followed by more Malaysians. In between this I received calls from Vicky advising she had rackets from other players from Hong Kong, India and Indonesia. 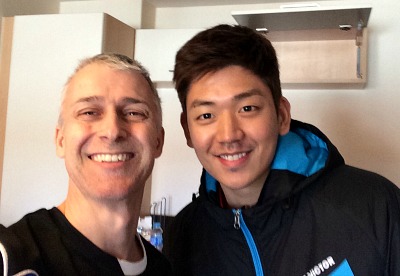 On Tuesday, as the players arrived I decided to become the selfie king which is unlike me. However, I wanted more photos for my blog. I finally met Yoo Yeon Seong on Tuesday and later in the day Lee Yong Dae brought his new Bravesword 12 rackets to be strung.

Throughout Tuesday we continued stringing non-stop except of very short 5 minute breaks. Ben kindly went to the shops for Mark as we still had no food in the apartment. I brought a pack of biscuits for guests and my nutritional products – which saved me. More on that later. Mark had basically eaten biscuits Monday evening and all day Tuesday.

Soren, from Victor Europe arrived Tuesday. He brought the additional 5 reels of string which was welcome relief. By 7pm Mark had reached a point where he couldn’t carry on. I sent him to bed and continued stringing.

In the late evening Soren, Ben and Pritesh from Racketline visited our apartment. It was great to see Pritesh whom I previously met at Milton Keynes. We were discussing the following evenings demo event which I was part of.

By 11.45 all parties agreed that I needed to get to bed as I was so tired. Meeting over, thank goodness I could get some sleep. My alarm was set for 5am…

When I woke on Wednesday morning mark was already stringing. He had been up since around 1am. I had my nutritional shake for breakfast and had already got a racket in the machine ready to string. It was another hard day with more rackets coming in, lots of rackets on the couch awaiting collection and my main worry was that Mark was clearly struggling to keep going.

Andreas, from Victor Europe arrived on Wednesday. It was good to see him. By 2pm I had to send Mark to bed again as he was clearly distressed and needed to rest. Since we arrived he had only eaten packs of biscuits and drunk Monster which I believe is a caffeine based drink similar to Red Bull. I was fine because of the products I brought with me providing wholefood nutrition, and therefore whilst I hadn’t eaten much, my body was fine. I had some fruit, meal bars and shakes. I was lacking sleep but aside from that was very well.

Many players arrived on Wednesday to drop off and collect their rackets. The Tsunami continued. I had to leave by 6.30 to help put at the demo night. Mark was just out of bed although not looking good. 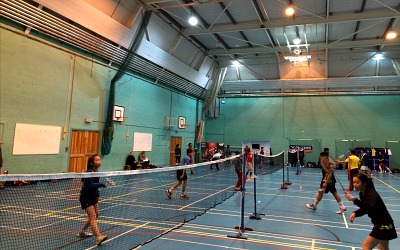 I arrived at the sports hall to a huge number of players, some juniors and lots of adults. The demo evening had been split into two one hour sessions. Introductions were made to the players and Ben worked hard along with Soren to get rackets into players hands.

We soon found out that rumours had spread about these events and so many inaccurate statements had been made. A group of children had arrived for the master class coaching, so I was quickly in action on court with a dozen or so coaching them on movement and hitting – most unexpected. It was great fun!

It was also nice to have a few people approach me who recognised me from my website to introduce themselves. One player was also a stringer so I invited him to visit us in the stringing room. He arrived either Thursday or Friday.

After two intense hours on court we had to quickly pack up and vacate the hall. We were then invited for a curry by Pritesh. Whilst I needed to return to stringing I also couldn’t pass up this opportunity as I was driving Andreas. At 10pm I was eating curry, which is not my ideal time for a meal. Mark telephoned during the meal advising he was closing down the room as he needed sleep. He was not well. I advised him to take my nutrition capsules and then we went to bed. When I returned from the demo evening I went to bed and set the alarm for another 5am start. Let’s see what Thursday will bring!