My alarm is set for 5am again and I’m up and stringing. At this point there are still many Victor-sponsored players in the tournament and therefore it’s important we string as many rackets as possible.

The good news is that the end is in sight bearing in mind Saturday is our last stringing day. Mark joins me later and he’s still not feeling great. I ensure he takes three more of my capsules and I make him one of my shakes. By lunchtime he is looking and feeling so much better – thank goodness.

Thursday was another long day of stringing with more rackets appearing, albeit in lessor numbers. That said, we were still fighting to reduce the number of rackets waiting to be strung. With Mark improving, our spirits rose.

On Thursday evening I had a dinner date with the Victor team. During Thursday and Friday we had a number of guests arrive to see what was happening in “the stringing room.” Of course this was great in some respects because this changed the conversation and for some I think it was a reminder that stringing at the All Englands is a job and not a holiday. It’s really hard work, requiring a great deal of concentration and hands/bodies get tired.

My dinner date was welcome relief and a chance for a meal. This was followed by a meeting in the sales apartment discussing the Ambassador program. It was good news for me as Soren announced that Victor wanted to increase the number of Ambassadors in the UK. It was late when the meeting finished and time for bed.

Friday is a late start at the All Englands which was welcome relief for us. We were flying through the rackets following another 5am start. With the late start this meant it was more likely players would be collecting their rackets from 4pm onwards so this meant we would not receive another batch of rackets until pick up time, unless a player decided to drop off early for late collection. One or two did this.

By lunchtime we were making such good progress that myself and the other Victor team booked a couple of hours on court to test the new frames. It was great fun and welcome relief to get on court and hit with these superb rackets. My only regret was that we couldn’t sneak a Hypernano 800 out of the stringing room and test this racket too. My favourites were the new Jetspeed 10, Jetspeed Natsir and Jetspeed Ahmad. Hopefully I’ll be in a position to fully test and post a review of these in the future.

Friday night was also a bit of a domestic night. My two boys were being dropped off by my wife who was en route to a reunion night out in Worcestershire and therefore the boys were staying with me. By this time we had received a lot more rackets although the room didn’t look as full compared to earlier in the week. With kids TV on for some time, Mark had to suffer the nonsense that they watch, much to my amusement. That said, I had strung through all kinds of rubbish TV during the week with Mark in charge of the remote control. It didn’t matter as the TV was merely background noise.

During the evening we had a few visitors and I made the most of having the boy’s photos taken with whoever came in. Luckily for us all of the players were happy to oblige. 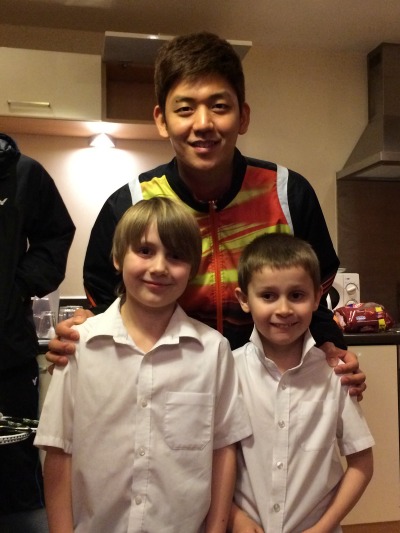 Saturday was a very mixed and frustrating day. I had a meeting in the Yonex suite with one of my retailers and therefore left the boys with Mark. During my meeting I was accosted by another retailer who thought he would make the point that he would never sell Victor rackets. I had to dump him very quickly! My thoughts about him and his shop are not for print!

Saturday afternoon was busy with people contacting me wanting to meet up in the arena and my two boys were inside watching the badminton. I saying watching but I think they were more interested in what they could eat rather than sitting still and enjoying the superb badminton. Lesson learned, don’t bring two to watch – one is easy!

Overall I watched just over three matches and was disappointed to see Tai Tzu Ying lose after looking certain to win the first game. However a series of errors where she tried to play too close to the net were her downfall and very soon Marin was on her way to her first All England final. Chen Long versus Lin Dan wasn’t so much a match as a showpiece. To me Lind Dan wasn’t fired up to win, however he may have been told to lose – this is well known with China versus China matches.

The highlight of the day was finally meeting Owen Kilburn, England para-badminton player. Owen and I have developed a relationship through my forum and latterly over the telephone. Owen was playing on the concourse against anybody that would sit in a wheelchair and have a hit. Sadly, we only got a few minutes before I needed to collect my boys from my parents and head back to the apartment. More racket had arrived.

Angie my wife arrived around 5pm and after a brief stay she took the boys home. There were too many rackets to complete.

So, after a disjointed Saturday, it was back to hard work and finishing the rackets. Thankfully my last racket was completed just before midnight. It was time for a cup of tea whilst Mark finished off his last racket. By 12.15am we had both finished which effectively ended our All England campaign.

It was nice to have a leisurely Sunday morning, not having to set the alarm. Sunday was packing up day. All players were asked to collect rackets before 10am. By this time we had dismantled the stringing machines, tidied the room and begun putting the furniture back into the correct room. Lee Dong Keun collected most of the rackets for the Korean players.

We loaded the car, said our farewells to the Victor team in the other apartment before taking a nice leisurely stroll over to a hotel to drop off the remaining rackets with Vicky. After that it was an easy drive to drop off Mark and return home. It was great to be home and walk in to a lovely roast dinner.

This was a great week. Overall, Mark and I had strung 174 rackets in just five and half days. Looking back, Monday through until Wednesday was the toughest with me stringing for 30 hours straight without sleep or any decent break. It was a huge challenging week and I feel so much richer for the experience.

I look back on the week as a time of growth. We did a great job. During the drive home Mark confirmed he would be happy to return in 2016. We will be ready for the experience although may ask for some assistance in respect of preparing rackets. This was the most time-consuming element. Bearing in mind so many players had new frames with the introduction of the JS9, JS10 and Hypernano 800, 2016 may bring different challenges as rackets will be a year older.

It was good to see some of the new faces emerging in world badminton. The Malaysian team are young, Korean team have a few new names, Hong Kong players are new to the All Englands. So there’s a good mix to look forward to meeting next year 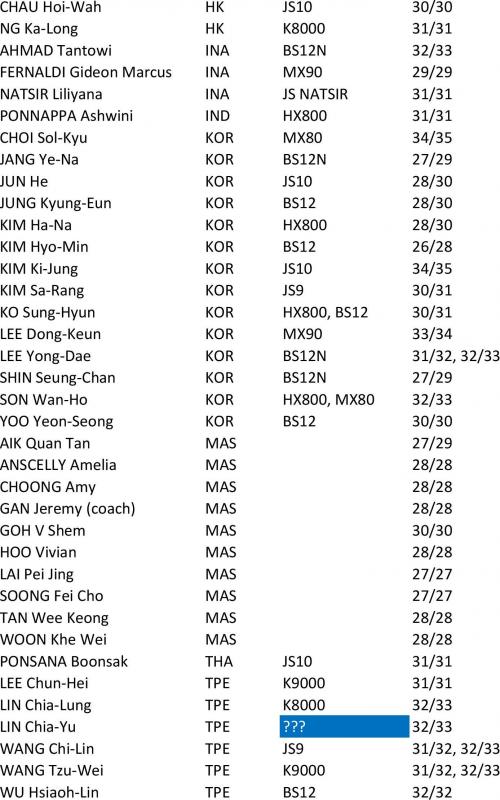 Having been thrown into the deep end this year I think the only changes we will make are to buy food early, before we leave. I’m so pleased that I had good nutrition during the tournament and therefore I didn’t suffer at all during the week. The lack of sleep was the biggest issue and I do not expect this to change much next year.

Allowances have to be made for the various meetings I attend during the week as part of my work with Victor. Hopefully we’ll arrange another demo event next year and have another fantastic week!