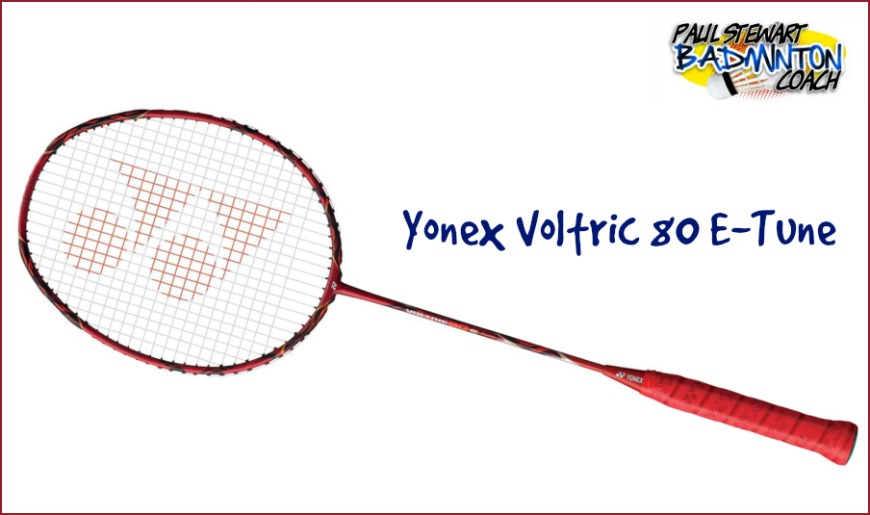 The original Voltric 80 was introduced a number of years ago and quickly became a huge success for Yonex. In 2014, Yonex introduced the latest Voltric, the 70 E-tune which was met with mixed reviews. Of course, it wasn’t long before the Voltric 80 E-tune was unveiled and a number of well-known players were seen using the latest frame.

The E-tune concept was launched in 2014 which essentially is a self-customising for head weight on the racket by way of interchangeable or push on weighted grommets. It’s a clever idea although this does mean the racket must be restrung to test the weighting which can therefore be an expensive test-bed.

I was a huge fan of the original Voltric 80. Whilst reviewing this racket I tested it against the original which gave me a few additional insights and also allowed me to answer the biggest question…is the E-tune a repainted Voltric 80? 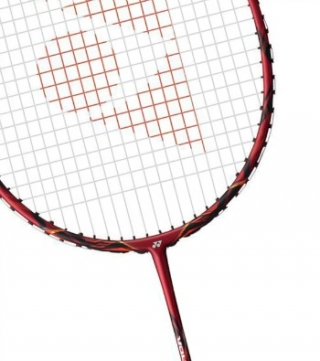 The VT80 E-tune arrived in the standard full length black cover with the familiar “Voltric” symbol and the usual “YY Yonex” emblazoned across it. This racket has a matt finish and a colour scheme which is not my taste in burgundy, with mainly black and blood orange decals. That said if a racket plays well I would still buy it and won’t be put off by the colour.

This is a 3U version (85-89g) G4, large grip. Yonex continue to issue rackets with a G4 into the European market. I expect this is because the market overall prefers this size grip. Personally I now prefer G5 although for many years have used G4 grip size. The racket was already pre-strung with BG65Ti which is one of my favourite strings. I’m unsure whether this was strung by the retailer as usually the stencil ink flakes off the string. I’m hoping Yonex have fixed this issue and have returned to providing the usual quality stencil on their strings.

I am very familiar with the stiff shaft, head heavy specs of VT80 and therefore was looking forward to testing this model to see how it compared. As I said earlier in this review, I had the good fortune of testing this model against the original VT80.

As expected the head heavy, stiff shaft combination felt very comfortable. It’s a spec I have used for many years. The racket felt a touch heavy but that’s partly because I have used lighter rackets for some time due to injury.  Whilst it felt good and clears were traveling well, the weight distribution was certainly different. To be honest, Yonex appears to have beefed up the racket head a little. The 10 and 2 o’clock positions look bulkier. Perhaps this is due to the grommet strip which supports the additional weighted section. However, for me the racket doesn’t move as well through the air. Having the original VT80 to test against proved this was indeed the case. So whilst my clears were nice, I felt as though I had to work harder to achieve a good length.

It could be argued that the lower tension isn’t helping here and I would accept that point of view. However, a lower tension should, in theory, provide more repulsion and provide greater power.  But, when you’re used to certain tensions, playing with a racket strung at considerably less tension can sometimes feel heavier and bit slack.

Drop shots were really solid. There is something about a good weighted racket head which provides a more-certain feel when the shuttle is struck. Whilst not quite as nice as the original Z Force, there is almost a confidence which grows with this type of racket and the knowledge that the shuttle will be struck well and travel where it is supposed to go. Sometimes with a lighter head it’s easy to lose sense of the feel and therefore hit short.

Onto the smash. I was expecting great results from this racket in the knowledge that the original still “has it.” Sadly, I didn’t get that same feel with the VT80 E-tune which was a bit disappointing. That’s not to say the racket isn’t capable of delivering power because it does. However, the overall balance and feel just felt a bit, erm…clumpy to me.

Flat drives and pushes needed work and again the racket head doesn’t cut through as quick as the original. I still enjoyed the challenge of maintaining the rally and at least I didn’t feel as though my arm was going to fall off which was one of the issues with the original Z Force.

Of course, it’s important to have a combination of good technique and fast hands to defend well with head heavy rackets. In Asia, many of the players opt for the 4U version of the racket which therefore provides a slightly lighter frame but still having the weight in the head. I can understand why as it provides the best of both worlds. That said, again I like the solid feel when the shuttle connects. Block shots were great although lifts and drives needed a lot more effort. That said, when you catch the shuttle correctly, then it flies so well!

This is my domain and I like a racket that is solid and allows the player to take control. This racket allows this to happen if you possess the hand skills to tame it. There’s no need for big swings and the little squeeze shots well-executed are lethal. A head heavy always provides that feel of knowing where the racket head is and this aids control. But, you have to prepare well to move the racket into position quickly. You really can’t afford big swings at the net otherwise you will be punished, especially with a racket like this. It forces you to shorten the swing and get your technique right which has to be good.

I think I’ve already answered the big question … the Voltric 80 E-tune is definitely NOT a repainted VT80 with different grommet strips. In some ways it’s a shame because I feel many players could be disappointed with this racket if they already use the original. That said, I still consider VT80 E-tune to be a good racket and a solid performer overall. Comparing against the original may seem unfair but that’s what players will be doing and therefore it’s a question that needed answering.

RRP is £185 which is expected for a top of the range model. Online stores have already discounted to just under £140 which I think is good value for money. You are getting a lot of racket for your money, and of course it’s made by Yonex so there is always that pedigree and re-sale value too.

My expectations were high with this racket and in some ways I end this review feeling a little disappointed. I was hoping for a super VT-80 but the changes to the frame have reduced the aerodynamic qualities in my opinion. It’s still strong and powerful and the ability to semi-customise the weight distribution is genius. Time would not allow me the luxury of testing all the variables with the weighted grommets but I can see the benefit of being able to make minor tweaks to dial in the right balance for you.

Overall, it’s a good racket and well worth a try, especially if you prefer head heavy specs in a racket. I’ll give this a four star rating.