A Tale Of All Englands Badminton Stringing 2016 – Part Three

Thursday begins with a number of early visits, with players requiring their rackets to be finished to meet scheduled times of play. I have a few meetings to attend in between badminton stringing and watching the action in the arena.

The first match I see is the Russians vs the Danes – it should be an interesting encounter! I expected the Danes to win and was amazed at the ferocity of the Russians attack. They looked the deadliest pair of the tournament.

I also watched the Japanese pair of Hiroyuki Endo and Kenichi Hiyakawa vs an Indonesians pair Angga Pratama and Ricky Kawanda Suwardi, I hadn’t seen before. The Indonesians won the first game playing so aggressively and brilliantly controlled net play, completely outplaying the Japanese pair. The second game began well for them although it was noticeable that a few mistakes were creeping into their game. Also, the Japanese players were continuing to play very steady badminton… the match then turned. More mistakes by the Indonesian pair cost them the second game. The Japanese were now on top and went on to win.

Next I watched Praveen Jordan and Debby Susanto in a great match against a Japanese pair Kenta Kazuno Ayane Kurihara. The match was a thriller going to a third game. I was enthralled by the Indonesian pair, especially Praveen Jordan who I thought was outstanding. On this form I couldn’t see anybody beating them. However, sometimes players have a great match and then cannot replicate that form throughout an entire tournament.

On Thursday I met with a few of the Yonex stringing team. They advised me that they had restrung fewer rackets being 50% down compared to previous years. It’s hard to explain why but this echoed our experience as we were virtually up-to-date compared to last year. It was good to note that string tensions were slightly down too. 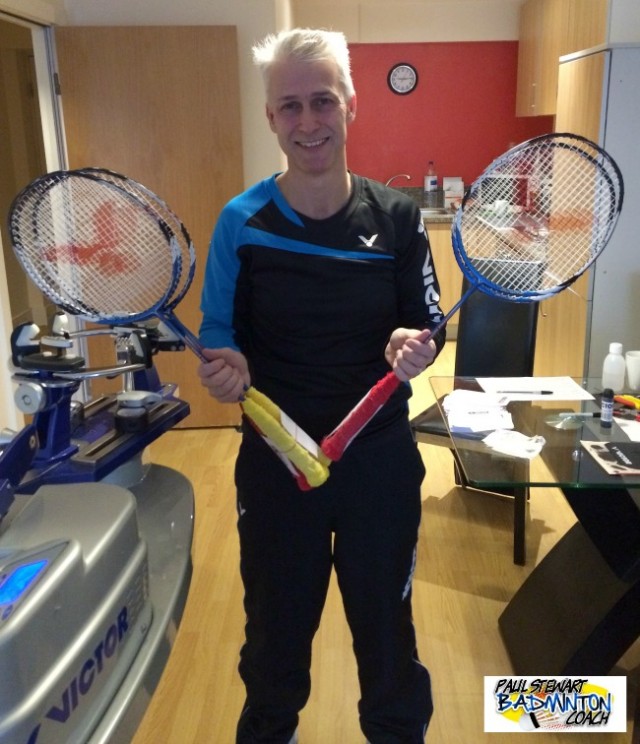 Friday is quarter-finals day and a late start for players. I restrung rackets for Lee Yong Dae and Yoo Yeon Seong leaving Mark to restring the remainder of rackets which allowed me to attend meetings and fulfill my role as Victor’s Senior Ambassador in the UK. I had four meetings to attend and I also bumped into a number of players who had attended my residential badminton weekends. I also had a meal with the Victor team before entering the arena later in the evening.

I saw a few matches, especially the all Malaysian affair between Goh V Shem and Tan Wee Keong versus Koo Kien Keat and Tan Boon Heong. In one period Goh and Tan appeared to be breaking strings every rally – not good and most surprising as we had completely re-grommetted their rackets.

After watching this match, I returned to the apartment. Not long after that Yoo Yeon Seong arrived with a racket.

Saturday was busy. In the morning, some of the Victor Ambassadors arrived and we visited a local sports centre to test rackets. He has one hour on court and tested around 6 rackets. It was great fun and very interesting to get a feel of these new rackets. We changed and headed into Birmingham for a meal before finally stopping at the Novotel to look at the Victor showroom with all of the latest samples. It was like placing a bunch of children in a sweet shop! It was great to see the latest shoes. The 920 shoe in blue looked amazing and the 9200 is going to be incredible – what a great sole for better grip on slippery floors. We also saw the latest shirts, especially the lovely yellow/blue shirt the Korean players were wearing at the tournament.

Mark was still in the apartment stringing rackets, mostly for those players travelling to Switzerland for the Swiss Open.

Later that night, we met with the Victor team in a restaurant for a quick drink and to celebrate the success of the tournament. It has been an excellent week, not too hectic compared to last year. We had delivered a great stringing service to the players, with quick turnarounds, meeting player deadlines. Our biggest disappointment was the loss of Lee Yong Dae and Yoo Yeon Seong on Saturday in the semi-final. They had looked tired all week and were well below their best form. I look forward to hearing the commentary on their matches when I finally get around to watching on Youtube.

On Sunday we dismantled the stringing machines and packed the car to go home. We delivered the last racket to the Korean team and walked along the canal to the Victor sales suite. Here I met with friends from Gibraltar who had a quick look at the 2016 range.

We said our goodbyes and headed home knowing we had done a great job again this year. The service to the players was excellent and it was so nice to meet such a friendly bunch of players. With great sadness we travelled north. The week was over too soon. Oh well, I will be in Birmingham next year heading up the Victor Badminton Stringing Team. With less than a year to go, I’m already looking forward to 2017 All England Open.