In 2013 Yonex surprised us all by launching two additional racquets in the Arcsaber range, namely Arcsaber 11 and the unusually named Arcsaber Flashboost. Many Yonex followers were expecting to see a scaled down Arcsaber range in 2013 on the premise that this is the next range to be withdrawn and a new successor announced.

Perhaps the biggest surprise was the launch of Flashboost. Why? Simply because this racquet weighed in at an incredible 73g, a first for Yonex! This has gone beyond previous weightings. Initially the racquet was designated a 6U, however this has now changed to an F which presumably means Yonex is now experimenting with racquet weights and this will precipitate new coding in the future.

Grip size G4 – the standard offering from Yonex in UK, and it would seem that Yonex is favouring white grips these days, possibly to show off the colours and brighten up the racquet. I’m not a big fan of white grips as they discolour very quickly and then look grubby. Balance is 307mm which is a surprise and on the tall side for an even balance racquet.

Graphics are a welcome change in a matt finish, similar to Z Force in sonic blue, lime green black and white. This racquet looks good. Like the recently launched Arcsaber 11, Flashboost has a super-slim shaft designated stiff, although I do question whether this is correct as it felt more medium-stiff to me. As you would expect, the racquet was accompanied by the standard Arcsaber full length cover.

The Yonex Arcsaber Flashboost badminton racket is factory strung with Yonex BG65Ti, a personal favourite of mine although I would have preferred a higher tension than the 18-20lbs tension in this racquet. As with many Yonex racquets maximum tension is deemed to be 24lbs and with this racquet this is probably a very wise move. Yet again, the stencil ink flaked and fell off the strings within minutes of hitting – Yonex really need to do something about this, as it creates a bad impression!

Before going onto court I thought a lot about this racquet and how I expected it to perform. Surely it’s got to be good in defence providing great counter attacks, and lightning fast at the net, better than a Nanospeed 9900. But the big question for me is its attacking capabilities. Will this racquet provide the power from such a light frame? Will it provide that solid hitting platform or will it be too thin and flimsy? Let’s find out…

I always begin a test with clears. This provides me with an initial feel in terms of the swing of the racquet, flex, feel of the head in the swing and power capability.

After a number of hits I have to say that whilst the result was good, I felt that the shot itself was very “thin.” There’s no doubt you can get a lot of swing speed because of the weight, but the impact itself did not have that solid feel I’m used to, even with an even balance or head light racquet.

As I said, the result was good and I put this down to the excellent racquet speed. But I felt there was a certain feeling of frailty here. Having recently played with Arcsaber 11 which was pretty solid, I can’t pass this off as me comparing to my trusted Voltric 80. This was something altogether different.

You had to know where you intended to hit the shuttle because it was harder to feel the shot. So, every element of overhead technique had to work well because there was little weight in the head to really feel it. A most extraordinary feeling.

In some respects I felt the shaft held this racquet together, rather than the head. Whilst it has a thin shaft it performed well with an element of flex but not too much to cause timing issues.

Moving onto drop shots, Arcsaber Flashboost performed pretty well with a high degree of precision and touch. It felt good to perform shots at a different pace and it was fun to throw an extra fast drop in occasionally for no other reason other than you can. The light frame here works well and because of the weight it’s harder to notice any drag. But, it didn’t have that crispness I got from Z Force.

Onto the smash. The Yonex Arcsaber Flashboost did not perform as I originally expected. I was expecting a really fast swing and good solid smash. To a degree I got this, but felt I could hit a better wristy stick smash than I could full smash. Whilst the shuttle went down pretty well from the full smash, I didn’t get a good feeling of confidence out of this racquet, you know that feeling that makes you want to smash all night. Thinking back I almost changed style, shortening my swing a little and using my wrist more. The result wasn’t bad, but not as powerful as I can hit.

Moving into mid-court territory, this is where the racquet did what I expected by being superfast. The faster the shuttle the more this racquet wanted to perform.  It’s fantastic to handle as it moves quickly, sometimes a little too quickly and there’s an occasion or two when the racquet almost beat the shuttle. Flat rallies were easy to control and there is enough power from the racquet to give as good as you get. There’s plenty of control and the short racquet movements allowed easy blocks and changes in pace and direction.

As you can imagine, the super-light frame made defending simple. The racquet was fast, although it clearly preferred blocking over driving and lifting, which isn’t altogether a bad thing. Again, this is where I felt the head was a little thin and needed beefing up a touch.

Serving, return of serve and net work were a joy. I intercepted more shuttles with this racquet as it gave me that additional speed over my trustee VT80. You do need to play that net shot properly rather than expect a racquet to do it all for you but I consider indicative of light headed racquets too. But, overall this is where the game can be won and lost and this racquet clearly wants to dominate the net area – very nice indeed! 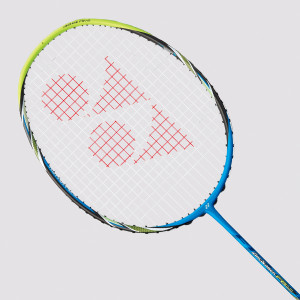 The Arcsaber Flashboost  is a different beast to any racquet I’ve encountered before. For me, where it shines is from mid-court forward, so this covers defence, flat exchanges, pushes, blocks and everything around the net. Where it is weaker is at the rear court. Whilst it’s still pretty strong, my concern is that it’s a bit thin and fragile for a big hitter and I can see this being a problem. Some may consider going that little bit further and saying it’s an unstable structure for hitting any power shot but I think it’s going one step too far.

For a player with a defending, counter-hitting style, this could be utopia, or the super-fast champion of the net. Whilst I wouldn’t say this is a ladies racquet, I can see a lot of ladies loving this racquet because it’s so light and does the things they are expected to do in mixed doubles very well indeed.

Yonex Arcsaber Flashboost  has a RRP of £160.00 although I expect to see prices around £135-40 mark from online retailers. In some respects this is a very difficult racquet to rate. On the one hand, considerable work has gone into the development of the racquet and in most cases it delivers what it says in terms of speed. On the other hand, I’m not so sure how this will appeal to players and in particular, which type of player picks this up and falls in love with it. The real negative here is that I wonder whether in the search for weight reduction, there has been a reduction in the strength of the racquet – there’s certainly a reduction in feel, especially in respect of feeling solid and reliable for the big power shots.

Against all of this is a price point which is relatively high and may also be off-putting for some. So, I’m got to go out on a limb here and give the Arscaber Flashboost only 3 and a half stars. No doubt I’ll have comments from players comparing this review to others I have written. However, whilst I accept this is a super-fast racquet, I believe there has been a compromise in order to produce a racquet to a specification and I don’t know whether this may prove to be too light too soon or a stroke of genius.