We pick up the tale at the end of part 2 with a pair of Victor Thruster K8000’s. I’ve strung these rackets many times, but not at such high tensions…

The main strings go in beautifully on the first racket and I begin with the cross strings – BANG! The main string where the cross string is tied breaks. Wow! That’s not happened before. Maybe it’s an unusual and rare fault on the string? I reach exactly the same point on the racket and again – BANG! The string breaks in exactly the same place. How odd. I check the grommet and it’s fine and there’s no reason that I can see why the string has broken.

On the third time of stringing, the main string snaps in the centre – BANG! I’d only put in two main strings. This is really unusual and hard to understand why these things have happened. It can’t be my clamps because they weren’t being used previously when the string snapped. Off I go again to string the racket for the fourth time and BANG the string breaks in exactly the same place! 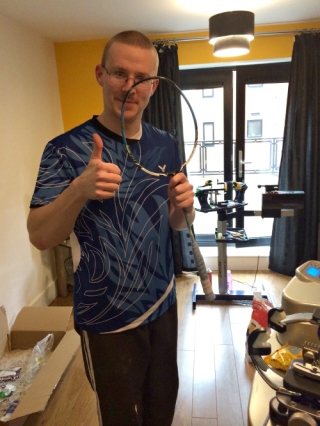 Third time lucky and the mains are in. When starting the cross strings me and Mark decide to try a completely different knot, one of Mark’s specials. Lo and behold, the string holds. My thanks to Mark for providing a belt and braces alternative. Off I go and all my troubles with this are over. I just finished threading the next cross string and BANG! the string breaks next to the clamp. This is now getting serious! So now I make the smallest adjustment on the clamp and this seemed to solve the problem. But that wasn’t the end of my frustrating day…

The Tale of the Flying Starting Clamp

For some strange reason I’m having a bad day. Having completed the first Thruster K8000, I cut the string from an opened set provided by the player and commence stringing the second racket.  I get all the way to the end of the main strings and realise that the string is too short – it won’t reach the tension head. I know I allowed enough from the two pieces and was definitely using the longest piece of string.

Mark is now getting nervous and so was I. Starting clamps are generally built to hold a string under very high tension, considerably more than the 29lbs I’m pulling on this racket. In tennis they will hold up to 70+lbs tension so this should be a piece of cake.

Eventually I completed the racket. Thankfully Mark saved the day by stringing other rackets on his machine without any problems, except for dodging flying starting clamps!

Wednesday evening, I was due to enjoy a break and a meal with Managing Director of Victor Europe and Ben Williams of Victor UK however, the rackets had to be finished as the players receive priority. 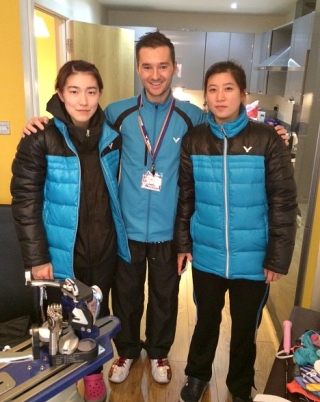 Play is late finishing and we stay up late. No more rackets are delivered but we finish the day with all rackets done.

Thursday saw a regular stream of rackets dropped off and collected. Vicky also collected the Chinese Taipei players laundry. The loaves of bread were rapidly disappearing and Mark had polished off most of the Jelly Babies, including my bag! Thanks for sharing Mark! 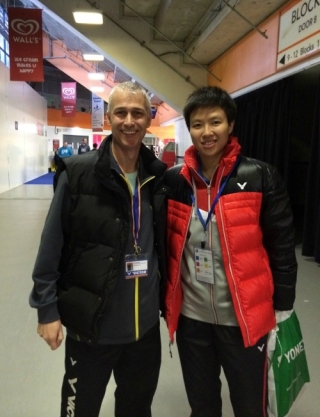 During the day I managed to watch some badminton in the arena and have my photo taken with a special lady – current World and All England Mixed Doubles Champion, Liliyana  Natsir. Whilst I was in the arena Ben had arranged a photo session in the apartment with a couple of Korean players with the view to taking a good lead in the photos competition…a competition nobody had spoken about, it was just expected. So, can you imagine his disappointment when I text him the picture of me and Liliyana – I wish I could have seen his face but Mark confirmed it was a picture!

On Thursday we received a couple more of Tontowi Ahmad’s rackets and Mark restrung them as I prepared the rackets. One of these rackets was completed, stencilled and placed to one side. Ten minutes later we heard a ping and the string broke! Nobody was near the racket or had touched the racket after it had been stencilled. We began to wonder whether our apartment was haunted and somebody was beginning to cause us trouble again! Thankfully this was the last frustrating incident of the week.

On Thursday evening, with only a few rackets remaining, I managed to go out for a meal with Andreas and Ben. It was nice to relax for once and discuss the week from a brand perspective rather than stringing. It was also good to make a few plans for the remainder of the season and into summer. 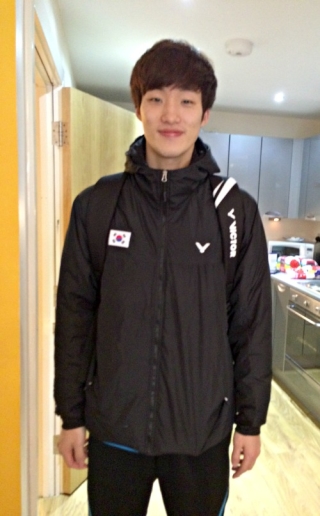 Friday was a big day for the Korean players and team Victor as many were playing in the quarter finals. Sadly I had to return home. Before I left the apartment I received a few rackets from Shin Baek Choel and took the opportunity for another quick photo. With the apartment empty I wish I’d done a selfie now, but nevermind, there’s always next year! Shin delivered three rackets for stringing, one of which was a blue KRP Bravesword 12. I’ve never seen one of these. We figured out it belonged to Shin’s partner Ko Sung Hyun.

On Saturday, semi-finals day I returned to Birmingham in an official capacity with a retailer plus my 8 year old son James who was about to experience his first All England Championships.

I met with a couple of my Victor Ambassadors, completed a number of meetings and then went into the arena to watch the badminton.

Our first match was mens singles Son Wan Ho of Korea versus World No 1 Lee Chong Wei. A three set thriller although I was disappointed in LCW’s performance at times. He could easily have lost in two games but the quality of play overall was just what I wanted  for James to watch. The match on the next court was Chen Long, World No 2 playing fellow countryman Wang Zhengming. Altogether this was a boring, one-sided affair where we knew the result before the first shuttle was struck.

Sadly the badminton that followed Lee Chong Wei’s match wasn’t particularly exciting being either a China versus China match or a ladies event which was great for me but not for my son! We had to leave before the men’s doubles events which was very disappointing.

Sunday is finals day and again I traveled to Birmingham to pack up the stringing machines and vacate the apartment.

Mark had completed all of the rackets which had already been collected. We therefore loaded the machines into the car, re-arranged the furniture as it was previously and then called Vicky to say our goodbyes.

Vicky kindly took us to meet the Head Coach for the Korean team. He told us all of the players were sleeping but they were very happy with our stringing service – a compliment we will take home and remember! 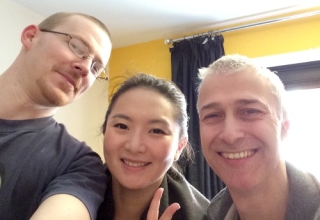 After final goodbyes and a selfie in our apartment, we’re on the road and traveling home for the last time. As soon as I pull out onto the main road, I point out to Mark a huge Tesco’s which we must have passed on our way to the apartment! So, on day one we went in search of Tesco’s and couldn’t find it. By the end of the week we find two Tesco’s with the biggest one being just a short walk away! We’ll remember that for 2015.

As you can imagine, we had plenty to discuss on the way home, running through the week on a day-by-day basis, re-living some of the funny moments, the frustrating day I had, the strange events that occurred such as the missing sign, Ahmad’s string breaking. We also considered what we would do differently next year to make our service even better for the Victor-sponsored players.

For me it was an enjoyable week although difficult with the traveling home on numerous occasions. Hopefully that won’t happen next year. Also, the difficulties on Wednesday were particularly issues to ponder, however, it’s all part of the experience. Quick note: Since returning from Birmingham I’ve not experienced a single problem with broken strings on a racket.

Mark and I received a great email from Andreas, MD of Victor Europe, saying how delighted he was with our professionalism and confirmed that we were the official Victor stringers for next years All England Badminton Championships! It was a great touch to round off our All England experience. Mark and I had already planned exactly how we would run the stringing next year. And that will be another tale to tell…