Are You Serving Short In Badminton To Win A Point or To Start A Rally?

I’ve often talked about the short serve in badminton being the most neglected part of the game. It’s an area professional badminton players take very seriously and spend hours working on every week.

So why is it that club and league standard players spend no time at all on this critical part of the game? Why do players in clubs fail to understand the tactical importance of the short serve in badminton?

It baffled me for a while and then I truly understood the answer! You see, the short serve in badminton isn’t exciting like a smash, it’s not a full-on action shot where glory is showered on the player who serves brilliantly in a game.

Or have we all got it so wrong and missed the point?

How often have you walked off court, losing a match and then complained that your partner’s serve was rubbish “they just couldn’t get the shuttle over the net or in the court.” Or worse, every time they serve, your opponent buried it! You’ll then admit that you can’t win, if you can’t serve.

And you’d be absolutely right.

We’ve all said this quote at some time or other, whether we’re blaming our partner or ourselves. So now we’ve agreed how critically important it is to serve well, shouldn’t we at least acknowledge a player who consistently served tight in a game?

In my opinion, this player should be seen in the same light as the player with the big smash. After all, they are consistently delivering a tight serve in the most tense period of the game, when literally the match could depend on their skill to keep the shuttle low and in the court. At 20-20, you have to agree that the serve is the biggest pressure shot in the game, especially when serving to a player who is ready to pounce on anything remotely loose.

In this scenario, the serve has got to be the most exciting, the most nerve-wracking shot to deliver because it can be a game winner, a match winner, or even a tournament winner! In my book, that beats the big smash and demonstrates a high degree of skill.

So why do we still choose to dismiss its importance?

I think the key here is finding ways to practice the serve that give it an edge, a higher level of importance and severe consequences if you fail to get it right. 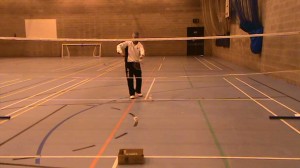 1)      Target serving – get your team take part and split them into 2 teams playing against each other. Each player has to serve to a designated target (e.g. a tube or shuttles or empty box) placed near the T. Each player has 6 shuttles and count how many they get in the box. The loosing team buys the drinks or some other forfeit you decide on.

2)      In your teams again – one is the attacking team, and the other the serving team. Choose one player from each team to go on court. You have 6 shuttles. Server serves from right court and must serve low serves. They can serve to anywhere along the service line but they are not allowed to flick serve. The attacking player can toe the service line. The attacking player wins a point if they can pounce on the serve and put it on the floor or the serve is out. The server wins a point when the player fails to return the serve over the net, misses it completely and it lands in and if they fail to bury the shuttle for a winner. Returns to the net or a push score points to the server. Again, have a forfeit for the losing team. Reverse the roles so each team has a go at serving and receiving.

3)      To improve your tactical awareness, work together to watch for weaknesses in a player. Work in pairs. Your teammate is the guinea pig here. They need to create 6 different scenarios which could lead to potential weakness e.g. receive on non-racket leg, racket too low (don’t make it too obvious), racket slightly wide to the right, forehand grip to name a few. Ask the server serve tactically this time. Once the serve has been struck, ask what they noticed and what they changed. If your teammate didn’t know the answer, try again. If they still don’t know, show them.

You’ve now been given three practices, two to help you improve your serve from a technical viewpoint and the final exercise from a tactical view.

If you work on these exercises on a frequent basis, then you will soon notice a huge difference in the results you are getting. Your serves will be significantly better which will lead to an improvement in confidence. Because you are now serving tactically, you’ll also recognise that you have changed and are serving to win a point and not to begin a rally.