Secret Badminton Skills You Must Possess In Order To Out Manoeuvre, Outplay And Outscore Your Opponent To Win The Game – Part 3

In the first part of this series of badminton skills articles, you discovered the different style of player. In part 2 I shared my thoughts on identifying your opponents strengths and weaknesses via a skills audit, albeit most of the time, an on-court, in the game, test your opponent type of audit.

In this third and final part of the series, it’s time to bring the pieces together and help you understand yourself as a player, your partner, how to be a winning team and how to design badminton tactics to beat your opponent(s).

Yes, we’ve covered this in part 1 but not like this.

In singles, whatever happens on the badminton court, it’s down to you, your skills, your strengths and weaknesses and whether on that day, you have all the pieces to defeat your opponent.

The first element of changing the game will depend on whether your style is getting the result against your opponent. Either they play the same style as you and therefore are better or worse at it than you.

Secondly, within the realms of style are skills. Is your opponent better equipped skill-wise than you are?
Having answered these questions, if you are in a commanding position, then there’s no need to change. However, if you are losing, then your ability to change your style and introduce new elements into the game and win will depend on two things…

1) Your ability
2) Your opponent’s ability to adapt to these changes.

It gets far more complex when you’re playing doubles. In this discipline, consideration must be made to both yours and your partner’s styles. Are they compatible or is this a recipe for disaster? E.g. if you’re an aggressive attacker and your partner is a defender thinker, then you’ve got such a mismatch it’s going to be difficult to gel as a pair.

There would need to be a good deal of compromise in order to find a tactical place to win points from.
So ideally, you need to choose your partner based on similar or complimentary styles.

Take a good look around your club members for a level and mixed doubles partner that would potentially fit this ideal. Do you know who they are? Have you partnered them in the past and played well together?

And What About Skills?

Just as important. Again, look for similar and/or complimentary skills. Why?

Whenever you partner a player, it’s important that you play the best combined game you can. To accomplish this, you need to maximise your strengths and minimise your weaknesses, however, you should always look to play to your strengths first and impose this game on your opposition.

In top class badminton I raised the point that the Defender Thinker style is obsolete. I’ll take this point further and suggest that the Aggressive Defender style is also obsolete because in the modern day game, matches are won based on the quality and consistency of the attack. Yes, player’s defences are becoming stronger, however, partnerships cannot afford to sit back and defend anymore. 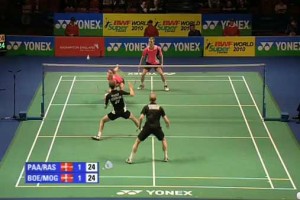 A classic complimentary partnership at the moment is current All England Champions Jonas Rasmussen and Lars Paaske. Rasmussen is the big hitter in this pair and prefers to play at the rear court. Both are excellent defenders. However, the partnership works because Paaske is by far the better server, is almost unstoppable from half court forward and sets up so many opportunities for Rasmussen. He also has a masterful tactical brain.

Rasmussen is the more nervous of the two players and tends to suffer serving jitters during big points. He’s also prone to the most unusual, kamikaze attacks at times which are extremely high risk and subject to a high percentage of errors. But, it keeps their opponents wondering what’s going to happen next.

In this case, one is a more aggressive attacker but is complimented by an Attacking Thinker.

What About Lower League Badminton?

In league badminton where most of us play, all styles are still prevalent and effective, depending on standard of the players.

There are styles which do not work well together or are not particularly complimentary, however this doesn’t mean they won’t win a few games. Do you know which ones fit well together and which ones are a complete mis-match? Let’s take a closer look…

Each of these combinations has potential to win but this will depend on the style and skills of their opponents.
I see a lot of aggressive defenders and defender thinkers in club level, more than I do aggressive attackers. I don’t know why this is, but it would seem there are many players who like to counter hit rather than attack with intent.

Having discussed the relative differences in style in earlier articles, one of the key elements in a good badminton player is the ability to adapt. In my opinion, the attacking thinker player is the most adaptable and that’s why they can fit other styles, albeit with a degree of compromise.

You see, sometimes you’re selected for a team and told who you’re playing with. Whilst you’d like to play your game, more often than not you also have to be aware of your partner’s style and skills and adapt to their game in order to win.

You almost have to compromise your game to fit into a partnership. And that’s why some partnerships don’t work. The players are incapable of adapting and gelling together to make a good pair. At times like these, the only thing to do is look elsewhere.

How Do You Design Badminton Tactics?

The first thing you need to do is work out your strengths and weaknesses as a pair. A high degree of honesty and realism is required here because once you’re on court, all of your skills are on display. Despite having a “bad day” you’d be expected to fulfil your role on court without too many surprises for your partner.

Second, you need to agree what is your strongest formation when you’re attacking. This begins to dictate the shots you will play to retain or gain this winning formation.

No surprises to guess that you ask the same questions of your opponents. What is their favoured formation? What are their strengths and weaknesses?

Having assessed this information, you design tactics based on moving them away from their favoured formation, focussing on exploiting their weaker areas. By understanding what these weak areas are, you therefore know where to place the shuttle to obtain the response you are looking for.

This means you play shots with INTENT, to cause a desired response. That’s what playing tactically means. So rather than your normal reactive response to a situation that your opponents have caused, you are now being far more direct in what you are trying to achieve, which is to obtain a weak response or error. From this the point is either lost by your opponent or you win from the intended set up.

Let’s look at an example…

So with this partnership, you decide to lure the Aggressive Attacker forward by taking the pace off the shuttle which they don’t like. Then you get the shuttle behind them to the rear court so that their weakest combination is on show. Your tactics are working. Now you need to pin the Defender Thinker into the corners, keeping his partner out of the game (this will test their mental strength because they can’t hit the shuttle hard).

From this position, whilst you may be defending, you are ready to pick up any loose shots and also quickly change your defence into attack. You may have worked out that if you drive the shuttle back from a smash, your partner immediately moves his base towards the net to counter a block here, therefore pressurising your opponent to lift and provide you with your favoured formation to attack.

As you can imagine, there are too many scenarios to play out here, but you get the idea don’t you? Your analysis of the opponents playing styles, and strengths and weaknesses, in addition to the analysis of your own game, allows you to design the responses you make in order to gain the advantage and take control of the game by adopting your favoured formation.

Before you go on court with your partner, why not change your approach to the game. Instead of walking on, knocking up and getting on with it, have a serious chat. Work out how to play your best game together and a brief analysis of your opponents.

Design your badminton tactics around the information you share and then play the game from the first point with intent to win points by the design of your shots.

I expect you’ll make a few mistakes getting used to this kind of game. However, I also believe that if you get it right, you will take the game off your opponents and they’ll leave the court wondering what happened.

This concludes my 3 part article designed to improve your tactical awareness on a badminton court. I really hope you’ve found it useful and you continue to develop in this area and surprise your opponents in the future. It’s been fun writing it, and I hope you’ll send in your comments when you’ve tested it to let me know how it’s working for you.

To your success.
Paul