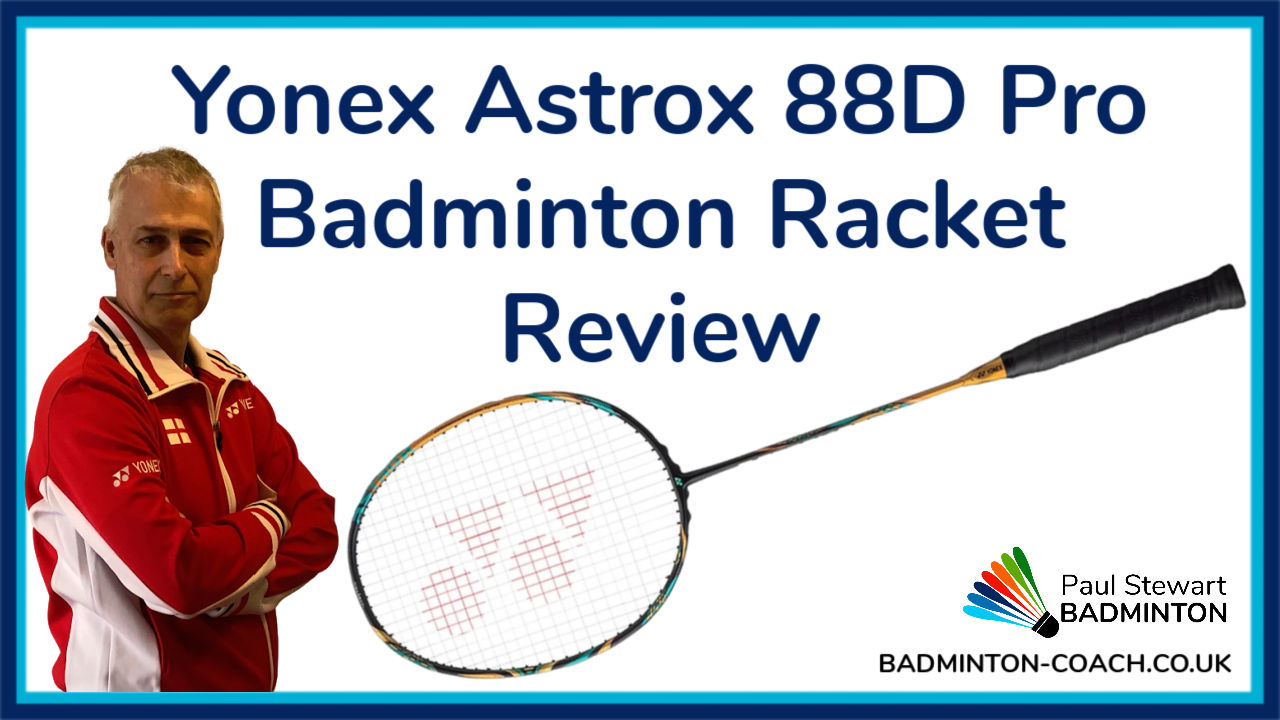 Yonex Astrox 88D is regarded as one of the most popular rackets amongst professional players. This follows a line of highly successful head heavy, stiff frames such as Armortec 900 Power, Voltric 80, Voltric Z Force II etc.

I was shocked to hear last year that Yonex planned to withdraw the Astrox 88 from the range. I thought it was a mistake, especially after launching a second colour option. However, Yonex obviously had bigger plans. Fast forward to March 2021 with the launch of a new, updated Astrox 88 series, with the familiar D and S options. But, the new Astrox 88 has also been introduced with more options and now we have the Pro, Tour and Game versions.

Over the coming weeks, I’ll be testing each of the new 88’s and writing my profile together with a comparison. There will also be review videos on Youtube so hopefully I can make sense of the Astrox 88 family and help you make the right choice.

So, here we are with the second review of the new Astrox 88, this time it’s the turn of the Astrox 88D Pro. This has been introduced relatively quietly with the Covid 19 restrictions meaning players around the world are either limited in play or unable to play at all.

On to my review of the Astrox 88D Pro

Continuing the opposing colour theme from the original, both 88’s will this time sport emerald blue and camel gold combinations, the main colour on Astrox 88D Pro being Camel gold. Surprisingly, the racket arrived without the customary full length cover and I am advised Yonex have refrained from using covers due to landfill concerns. I am aware that many players discard the covers so perhaps this is a good time to take a stance. That said, I would have liked the old style, racket head cover to provide a modicum of protection to the frame.

My review sample is a 4U (80-84g) with a grip size G5, my favourite grip size. In the UK there will also be a 3U grip 4 option. Shame as I’d love a 3U G5 option but it’s impossible to stock so many options for the UK market.

Comparing 88D Pro with the old Astrox 88S, there are a few noticeable differences. The frame on the new 88S Pro is fully recessed compared to the original. It’s just a worth a mention although I do not expect this will affect playability.  88D Pro has a longer handle by around 1-2cm which shortens the shaft and should result in a faster, more responsive frame. The shaft looks a touch thinner than the original too and flexes in a different spot. BP on the 88 D Pro is 316mm although doesn’t feel particularly head heavy.

I chose YonexBG80 Power string in white at a tension of 27lbs for this racket. Unlike the Astrox 88S Pro, the D Pro has the same string pattern as the original, so there should be a similar feel.

According to the Yonex chart, Astrox  88D Pro is situated towards the top of the head heavy zone with a hard feel.

In summary, this is a stiff, head heavy racket. This is usually my favoured specification, so I am hopeful that this racket delivers. I notice the 88D Tour sits in the same place on the Yonex chart so it will be interesting to test the rackets for comparison.

There’s a familiar feel about this racket, probably due to recently completing my testing of Astrox 88S Pro.

Manoeuvrability is so much better than the original 88D although the additional weight at the top of the head is noticeable in its absence. That said, this racket doesn’t feel top heavy like the original and I guess there is overall better weight distribution around the head, providing a more balanced and yet still heavy swing. When compared to my Astrox 100 ZZ, I was surprised to note the 100 ZZ felt the heaviest. 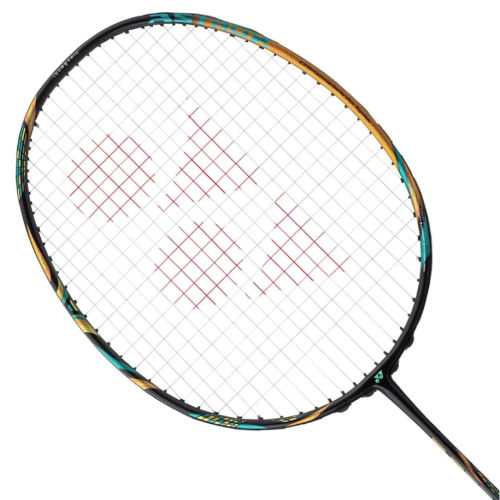 It’s fair to say the new Astrox 88D Pro swings faster than the original. The more aero-dynamic features of this racket provide a much faster response. Like the 88S Pro, there’s a refreshing, snappy feel about this racket, and still gives a feeling of a compact frame, despite definitely being full size.

From rear court hitting, this racket can still deliver power. This is like comparing a heavy-weight champion who delivers knockout blows, suddenly losing a lot of weight. The punch is still powerful and much faster in delivery, but doesn’t quite hit with the overall weighty punch it used to. You be the judge whether this is an improvement or not.

I consider the new 88D Pro performed well in attack due to the extra manoeuvrability of the frame. Punch clears, fast drops, slice shots and smash were performed with less effort and there was an added crispness to the overall result. However, as I mentioned previously, power is slightly reduced for those players who need the extra head weight, although others may find this a considerably more user-friendly version hitting bigger smashes…it really depends on your current preferences and ability to swing a racket.

Mid-court hitting was definitely more favourable compared to the original. Flat drives were really easy, with a great feel although I had to work the frame a little compared to 88S Pro which handled slightly better. That said, the racket is very responsive, and I preferred that extra weight behind the shot.

Astrox 88D Pro defends so much easier than the original. The improved head speed and overall manoeuvrability will make this a firm favourite for players looking for some weight behind their defensive shots and yet still providing a positive, fast response to any situation. There’s a distinct sharpness in feel here which allows the player to develop more confidence in their defence.

It’s expected that the Astrox 88S Pro is a slightly better racket for defending due to it’s lighter head, I still prefer the 88D Pro for that improved beef behind the shot, aiding in stability, especially when blocking into the forecourt.

My thoughts around the net area performance are similar to those I raised on Astrox 88S Pro. The head moves so well for interceptions and provides plenty of control on the short fast shots or when deft touch is required.

What we have here in the Astrox 88D Pro, is an enhanced version of the original in respect of the concept, but an altogether different racket.

Head shape, handle length, shaft thickness have all changed considerably and it feels as though head weight has shifted to provide a more balanced racket. Whether head weight is reduced is difficult to tell, but it’s definitely not as focussed at the top of the head.

Fans of the original Astrox 88D may consider the new Pro version as a watered down affair, although that would be slightly unkind. These are two completely different models. For me, I prefer the new version as I consider it has more options. If I want to increase the head weight, then I can add some lead tape…it worked for Lin Dan, so who am I to argue with that.

I also feel this new 88D Pro will find favour with a lot of players who want a solid performer but also prefer a faster frame. Overall, it’s a kind of good news, bad news story, but I’m confident the new Astrox 88D Pro will find an audience and become a very popular racket.

RRP is £185 as I write this review with retailers discounting to around £148. This is a fair price. It will be interesting to test the other variants on the Astrox 88D to compare which version delivers the best value for money.

Having played with Astrox 88D Pro for the last two weeks, I’m really looking forward to testing and reviewing the other D versions. I’ll post a video comparing the three versions.

As I mentioned earlier, it’s going to be interesting to see whether the professional players take a shine to the new version and switch. Time will tell. I felt that Yonex had described it well in advertising, seeing it as an upgrade from the original. The tricky part is rating this racket as I believe it has many good features. Putting the original to one side and looking at the 88D Pro as a stand-alone product, I think it has ticked many boxes and deserves a 5 stars rating.

Personally, I don’t want to return this racket, as I’ve really enjoyed using it. I recommend you arrange a test with your local retailer and compare to the Astrox 88S Pro. Both are great rackets and well worth checking out.