Hot on the heels of my last review of the Thruster K 8000 badminton racket, Victor Europe has released the new Thruster K 6000.

Surprisingly, I was presented with the 4U G5 version. Measuring 89g with string and grip and with a BP around 313, this is an extremely tall Victor racquet.  Specifications are 5/5 head weight and 3/5 shaft stiffness. Overall an interesting combination and one that has possibilities, if it can perform. Thankfully Victor Europe decided against a3U version which would certainly have raised questions.

So is TK6000 a complete and utter mix up, or sheer genuis in selection terms. Lets find out…

Thruster K 6000 is an attractive racquet with one of my favourite colour combinations, black and yellow. Excellent graphics and a nice white grip for contrast although I wonder whether yellow would have worked better. Perhaps a test for another time.

Unlike Thruster 8000, the 6000 is accompanied by a full length cover in black and silver, a new design which is also now used on Bravesword LHI. Very nice.

All higher priced Victor racquets are delivered unstrung but with a single set included. I like this idea as most players prefer custom stringing. The racquet was strung at 25lbs tension without prestretch using Victor VS800 string, a 0.7 gauge string. I’ve not used this string before so I have no knowledge of its characteristics.

From memory, i’ve never tested a 4U racquet with these specs so I’m into uncharted territory.

The initial feel is this is a light racquet with a strong frame. It’s feel incredibly quick which belies its specs.

Unlike the Thruster 8000 which required a fuller swing, Thruster 6000 provided the power irrespective of my swing. This is really fast in the swing and yet I can feel the head weight is all there to pack a punch.

Because it’s so good overhead, there’s almost a danger here of being too complacent with your technique because you know a quick snap and the shuttle’s on its way to your opponents rear court. That said it will reward good technique all day long.

I said earlier this was a strong frame and reminds me of the wonderful Z Force, without the weight or stiffness. The feel on impact is that solid, which ensures the shuttles remain on course even when hitting off centre. There’s also a smattering on AT900T too.

Drop shots were so solid, crisp and a real delight because the combination of speed with strength works so well together.

So far the medium flex shaft has not presented any drawbacks to this promising racquet. However, it’s smashing time…

With TK8000 technique was essential to unleash the power of the racquet. You had to get on top of the shuttle to generate power downwards. TK6000 is a different beast altogether and I would say a far better alternative.

This is where TK6000 excelled. The combination of head weight and the 4U spec worked like an exocet on a demolotion mission. This racqet allows you to really open up and use snappy, wristy smashes or the bigger wind up. Consequently, TK6000 opens up the angles on the smash that I hadn’t realised I wasn’t quite getting with other racquets. There is a danger of overdoing it and snapping the shuttle into the net, however, in general I was smashing steeper if I wanted which is a huge achievement for a player of my height. Is it the most powerful racquet I’ve ever used? That’s tough to answer because I can’t do like for like tests, but it comes close. Possibly Meteor JJS and  a couple others hit harder but there’s little in it.

Fast, flat rallies and drives were simply amazing. Lots of control, easy to get over the shuttle, change the angles on the racquet face, pull a few from behind me and yet there’s still that solid powerful strike with no signs of lag from the medium flex shaft.

Defensively Thruster K6000 is a star performer in the head heavy category. Whilst I’m comfortable defending, there wasn’t an occasion when I didn’t get my racquet to the shuttle. The speed generated gave the power for drives and low trajectory lifts, or powering up to the rear court with loads of height. And yet, the head weight ensured I could control blocks, steering the shuttle where I wanted. Again, the rock solid feel on the racquet face upped the level of control and placement.

I expected the head weight to be the racquets  achilles heel at the net but I was wrong. There’s all the speed I require, solid feel and no issues whatsoever when reflex or the odd rush of blood opportunity beckoned. TK6000 will move like a rocket over short distances.

Practice serving proved interesting too as that solid face delivered a really nice controlled low serve and a simply to execute flick or drives.

When I reviewed Meteor JJS I thought I had found my new best friend in the Victor camp. I was wrong, I found my new second best friend. With Thruster K6000 I discovered a racquet that allows me to play with more expression, opening up possibilities that had previously been buried or hidden. It’s an exciting racquet that allows you to be creative and yet has all the attributes to get you out of trouble. The phrase “I was blind and now I can see” kind of sums up my thoughts on Thruster K6000. 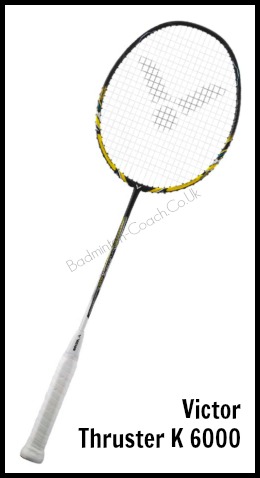 What’s frightening here is that I believe the racquet is capable of more. Whilst 800 string is nice, it’s not as lively and responsive as VS850 or NS880. I really want to supercharge TK6000 by restringing at my preferred tension and see if I can squeeze any more out of it.

What this racquet has made me realise is that there is another level. Meteor JJS was certainly very close, but it makes me want to reduce all of my scores by half a star. Thruster K6000 would easily be my six star racquet, but that’s not how my scoring system works.

RRP is around £160 and I see online retailers are selling for £115 which is a bargain. I appreciate TK6000 won’t suit everyone. However, this combination of head heavy, medium flex, 4U works like a dream.

One of the concerns I expressed to friends is that since moving to Victor I received a number of their racquets and each has received a high score from me. This could easily be misconstued as bias, hence my reason for writing this. The only way my reviews carry any weight is because I am honest and will continue in this manner. Consequently, I stand by every review I’ve written.

Now I’ve stated my only concern, it’s time to rate TK6000. If Victor had launched this racquet as a 3U I doubt I would be raving about it. This opens up another discussion point why we do not have the choice of weight that’s available in Asia, but that’s for another time. I wish we did as I suspect more 4U head heavy racquets would be purchased to provide similar results.

I’m proudly, with a fanfare and drum roll, rewarding Thruster K6000 a 5 star plus rating, my first ever! If you get the opportunity to test TK6000 then please do so because you may discover a new best friend on court as I have.