A Badminton Stringers Tale from All England Badminton Championships 2014 – Part1 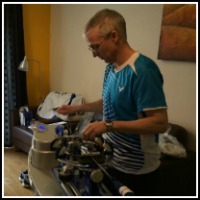 It’s Monday, 3rd March and the car is packed ready to begin my stringing week at All Englands. I’m excited and yet tired having returned from another successful residential badminton weekend the previous night. However, I new adventure was about to begin…

The first stop is a 30 minute trip in the opposite direction to collect fellow stringer Mark Appleton. Ten minutes after arriving at Marks and the second stringing machine is packed and we’re ready. A quick stop in the local shop for a few items before beginning the journey, after all we needed to get the coffee, tea and Red Bull!

Thankfully a slow but safe trip to Birmingham, arriving at lunchtime. It was our intention to arrive early and set up base camp before the Korean team arrived. Whilst transferring our machines from the car to the lift we meet our first badminton celebrity, Korean coach Ha Tae Kwon. Both me and Mark looked at him in astonishment. Have our intelligence sources been misinformed and the Korean team have already arrived in Birmingham? We already knew they were staying in the same apartments but weren’t sure exactly which block. And here was the main man in our apartment block. 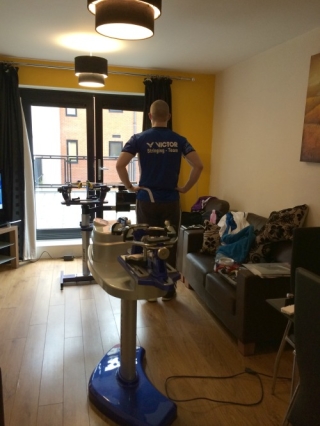 Into the apartment with all the goods and following a quick discussion, furniture is rearranged or removed to make room for the two stringing machines. Within 30 minutes the machines were working and ready for action.

Not knowing how much time we had, and with the uncertainty of whether the Korean players were waiting for us, we set off on what became our first talking point of the week and the subject of much banter…the search for Tescos.

Not to dwell on this too much, but our first steps on our quest were soon thwarted by a sudden downpour. Both of us were soaking wet as we hastily changed direction and climbed into the car. We’ll start again.

After several U-turns and lack of any useful information from Mark, a good drive around eventually got to the promised land…Morrisons! We stocked up for the next few days on a healthy diet of bread, cheese slices, digestive biscuits, bananas and sports drinks. Healthy guys! Now back to the apartment to eat and then install the signage on doors.

Lunch over, we placed our pre-made signs on the front door of the apartment, the door at the top of the stairs and the main door leading into the apartment block. We used Google translate to include welcome messages and advising where the stringing room was situated in Korean in the hope this would help the players.

An hour later I returned to my car only to notice that our sign on the front door had vanished! Who would do such a thing? As you can imagine, it was the centre of our immediate discussions and cause for profanity in our apartment! 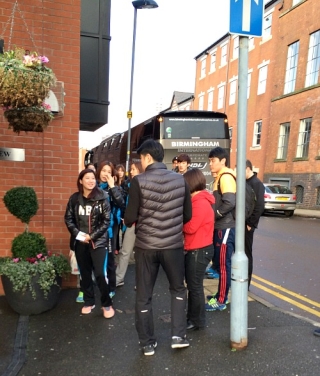 Making our way to reception to enquire if one of their people had moved the sign, we couldn’t have timed this any better as the Korean team disembarked off the coach. One of the coaches introduced himself as “coach” and then the team quickly moved into their apartments. As their door closed I noticed something familiar stuck to the glass – OUR SIGN! So, whoever had moved the sign obviously was thinking about us and the team, so thank you, whoever you are. Maybe it was coach Ha Tae Kwon who we’d met in our apartment earlier?

Back in our apartment we’re getting excited. The Korean team is in town and we eagerly awaited an onslaught of rackets, expecting to be stringing throughout the night…WRONG!

The liaison from Victor Asia was Vicky. She was in Birmingham to look after all Victor sponsored players from Korea, Chinese Taipei, Indonesia and India. in the early evening I finally received Vicky’s mobile number and the texting began.

To end day 1, we’d established base camp and strung one of our rackets just to string a racket with the Victor machine as we were both unfamiliar with it. Vicky told us there were no rackets to string and she would visit us in the morning. So an exciting and yet disappointing day as we’d geared ourselves to be stringing a lot of rackets in preparation for the tournament ahead.