As a player and a coach I’ve often wondered how top flight players have generated such amazing power. It’s a combination of many factors including timing of the shot, getting behind the shuttle to hit it, body-weight transfer, string tension, conditioning/training and the athletes natural muscle fibre combinations to name but a few.

There is one key element missing that I believe plays a major role in the power played on a badminton court – the speed of the shuttle.

I began to analyse shuttle speeds further and it suddenly dawned on me, thinking back over the years and even to this day, we’re killing skill at club/league level, which in turn is having a negative effect on our players, both junior and senior.

By doing this, without even knowing what we’re doing, players both young and old are being robbed of the art of badminton and in the ability to take their skill to new heights. Let me explain.

The rules for testing a shuttle according to the official Laws of Badminton are as follows:

3. TESTING A SHUTTLE FOR SPEED

3.1 To test a shuttle, a player shall use a full underhand stroke which makes contact with the shuttle over the back boundary line. The shuttle shall be hit at an upward angle and in a direction parallel to the side lines.

3.2 A shuttle of correct speed will land not less than 530 mm and not more than 990 mm short of the other back boundary line as in Diagram B.

When I grew up as a player, I was always taught that the shuttle should land around 15cm either side of the back doubles service line. Whilst this is more or less correct, on many occasions we played with shuttles which landed 30cm short of the back doubles line and all the players accepted the shuttle as good. As a young player not knowing the rules I came to accept this practice as the norm. I had no idea at the time that I was being subjected to systemised de-skilling. 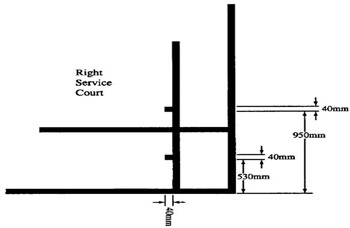 If you read section 3.2 again, the rule is very clear – that the shuttle should land between 99cm and 53cm short of the back line. This is NOT the doubles line as I was lead to believe, but the very back line of the court.

Thinking back, even to last season, I’m actually struggling to think of an occasion where we played with a shuttle that landed beyond the doubles service line. Every shuttle tested was short of the double service line by a considerable amount.

What Does All Of This Have To Do With Killing Skill Levels?

Think about all the effects of playing with a slow shuttle. First of all the simple task of hitting the shuttle to the back with a clear becomes more difficult. Only the very strong or consistently good players can do this frequently.

Let’s say that I’m a pretty good player but don’t quite have the same power capacity as a top player. A slow shuttle means I’m struggling to get a good length and have to work harder, or it can also mean that I have no chance of hitting any decent smash from the back line.

In this example, you may be thinking “well so what, tough luck.” OK, I hear you, but the speed of the shuttle is still having an effect on my skill levels. It means I do not get the same results as someone playing with correct speed shuttles. Let’s take this one step further…

Time and again we see the pros hitting the shuttle out at the back having been put under pressure in a rally. Or, they fail on defence because the attack was just too good. Both these instances in league and club badminton are unfamiliar these days because we play with slow shuttles. OK, they do happen but there’s way more effort required.

So yes, we still hit the shuttle out at the back of the court, but I’ll wager that this would become more frequent if we played with the correct speed shuttles. The art of hitting the shuttle with just about the right amount of power will have to return, otherwise we’ll lose more points. I believe we’ve been so accustomed to playing with slow shuttles that these “touch” skills have eroded.

Let’s look at defending for a minute. In world badminton defences have got better and better over the years. This is partly down to racquet technology and also constant development of skill by the coaches and players.

In league play, we’ve all but lost this skill as we are not facing the same power levels – because the shuttle is too slow. So, we are not developing our skills to the same heights in order to control these returns.

And there lies the key to our downfall. Slower shuttles are actually reducing our ability to control the shuttle properly – we are merely returning it with a degree of control.

I’m not saying the skills don’t exist otherwise we wouldn’t be able to play half the shots we do, but I do believe that skill levels have diminished because of slow shuttles.

I’ll wager that if I showed up at most clubs with correct speed shuttles, I’d have complaints within minutes that the shuttles are too fast, with players losing points hand over fist because they cannot control the shuttle sufficiently to keep it in. The players wouldn’t like the power from their opponent that they cannot control although they’d be really impressed with their own power shots. And this is where the art and skills and have sadly diminished in our beloved game.

How Do We Reverse This Trend?

The good news is we can get them back. We’ve got to make sure players in every club understand the rules. They need to change now and within a very short period we could actually see a return to higher skill levels in the game and hopefully even more entertaining badminton.

It’s really is that simple and yet, at the same time very difficult. Club and league players have been playing with slow shuttles for years. The resistance to change will be as great as any other major change hitting leagues e.g. the new scoring system (even now some clubs around the country have not changed from the old system). But, we’ve got to persevere if we are to turn this around. For the older generation change may take time, but we’ve got to press on hard for the juniors because they are our champions of tomorrow.