If You’re Serious About Improving Your Badminton Footwork, Then Read On…

As with many forums, whenever you mention footwork, inevitably the great Lin Dan appears to remind us all how it should be done. Lin Dan has many strengths. Perhaps his greatest strength is his ability to cover the court so well. I believe this is due to his superior recovery from difficult situations, compared to travel to the shuttle.

How many of you spend time on recovery badminton footwork patterns?

…And, how much time do you work on it compared to the work you put in improving footwork patterns to the shuttle? I expect your recovery footwork is given only a small percentage of time compared to your other footwork.

This is where your greatest opportunity for improvement may be…

As you would expect, there were a number of videos, forum posts and articles about training exercises to improve badminton footwork – all of which are good. Here are a few ideas…

3)      Pattern drills on court with and without a shuttle

The above exercises are good for developing technique. However, whenever you practice on court, pay more attention to your recovery pattern and speed than you have previously. You’ll be amazed at your progress when you do.

But, this is only one key element in mastering this skill. Whenever you watch the likes of Lin Dan, Lee Chong Wei, Taufik Hidayat, they all use similar patterns, but not exactly the same. So try different patterns and see if one or two suit you better than others.

But, there is one critical part missing here. Do you know what it is?

There is a second element to improving your badminton footwork that I have never written about before and I have never read anything on the subject before.

So what is it? You can spend huge amounts of time improving your footwork using the exercises above, however, if you’re serious about transforming your footwork into the pro league then you need to develop your internal clock.

Whenever you play a game, there is a certain pace you are most comfortable playing at. When you’re pushed to play above or below this pace, you’re more likely to make errors. This internal clock, or internal body rhythm can be trained over time to help you play at different speeds.

In our player examples above, I focussed on singles players as they have to cover greater distances on court than doubles players. However, this article covers all disciplines.

How Do You Train Your Body Clock?

My main area of focus is on training to increase speed as this is where most players are weaker. Whilst it’s not always easier to play at a slower pace than your norm, the reason for this is usually mental rather than physical.

Generally, playing at a slower pace requires increased levels of concentration because we are not tasking our resources to play on adrenalin-based reflexes. We are, in effect, giving our brains and bodies too much time and therefore allowing too many other influences to get in the way of the decision-making process of which shot to play. Also, the brain has the time to dissect the shot into component parts rather than just play it.

1)      Training your eyes – if you don’t see the shuttle quick enough, then you’re already “late” in your movement.

2)      Training your reflexes – this involves the reflex of getting started from wherever you may be on court.

3)      Conditioning your muscles to perform faster.

4)      Testing new tensions in your racquet once your skill has improved. Why? You may find that because you’re so much quicker, you require the shuttle to leave your racquet face faster. You can only get this from increased string tension.

5)      Consideration to food intake in relation to what you eat and when you eat it. There’s no point in eating a large meal minutes before you are due on court because it will slow you down. I do not have the expertise to go into detail about food groups or eating times. You will need to consult an authority on this subject.

OK, I’ve given you the “what” but you now want to know “how” to train your eyes, reflexes and muscles. Here’s a few ideas for you.

First of all, if you haven’t had your eyes tested, then I suggest you do so. If your eyesight is failing, then these exercises won’t help you until you’ve done something about it.

1)      Cover the net with a non see-through cloth such as a black bin liner or lightweight material. Ask the player to take up a base position on the front service line in one half of the court. The feeder throws shuttles just over the net in the same half of the court for the player to step forward and play a net shot reply (1 set is 1 dozen shuttles). The player is therefore scanning continuously for the shuttle to appear and then has to quickly respond with a net shot.

2)      Increase the speed of your feed so that the player then has little time to recover to base before they are moving again. Vary the feed along the half court net area and make sure the feed is intermittent. We are not developing a new rhythm here, but pushing the eyes to scan. Take a break after 2 sets as this can be hard on the eyes and concentration.

3)      Feeder throws from just below tape height so the shuttle is approximately 3-5cm above the tape. Player steps in to hit shuttle to the floor. Note: feeders must not be facing the player but standing just off court. The shuttle should be aimed straight up near tramlines and the player should be able to kill straight or into court.

1)      On a set command player turns to face feeder and adopts ready position. Feeder is stood on opposing T piece. Feeder throws the shuttle over the net once they shout a command such as “turn”. The shuttle can be aimed in specific areas  (begin with 1 area and add more as you go along) such as forehand net, backhand net, mid court, at the player. Player has to immediately go to shuttle and play a shot aimed away from feeder.

This is a huge exercise which should be developed over time. Increase the degree of difficulty by adding another target area for the feeder and/or add a target area the player must play the shuttle to.

Conditioning Your Muscles To Perform Faster

As this article is already getting long, I’ll list a few ideas here and would also advise adding specific exercises in the gym to train explosive power – not muscle mass. 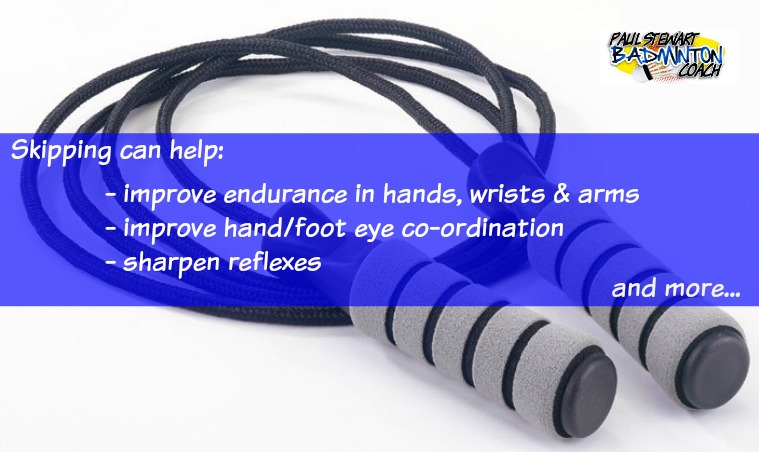 OK, I’m skimping on writing more detail on some of the latter exercises because I’d like to see what kind of response I get to this article first. If you like what I’m saying and want more information, then email me or comment below.

I really believe that these exercises in total will significantly improve your footwork and overall badminton too. Developing an ability to play a faster-paced game increases your tactical options against any opponent. To do this, you need to improve your speed at which you see the shuttle, reaction time to commence moving to the shuttle, actual movement to the shuttle, and recovery to base.

Have fun with these exercises and I look forward to reading your comments and emails.