Are You Talking Yourself Into A Poor Performance On Court? – Part 2

In Part 1 you discovered the various components of performance which are conditioning, skill, nutrition and psychology. I challenged the belief that a third party can motivate you and explained that, in general, nobody can motivate you except yourself, unless the wrong kind of motivation is applied. You can be inspired by others which can in turn motivate you. Let’s look at this more closely…

Let’s understand first what motivation is. The Oxford Dictionary describes motivation as

“the reason or reasons behind one’s action or behaviour.”

Motivation occurs when a decision is made for change. This may have been triggered by something you see or hear which in turn creates a feeling. It’s an idea that goes beyond a wish and into the second phase where planned action occurs. The difference between the wish/idea phase and the action is the person’s “reason why.”

Watching the Olympic Games can be great entertainment. For a rare few, it can literally light a flame inside them (no pun intended), almost a calling to do better or to take up a sport they haven’t tried before. It’s great when we see young children participating in sport for the first time as a result of seeing their “hero” on the TV win a medal.

At this stage, they haven’t fallen in love with the sport. They have been inspired by one person’s achievement and perhaps have the notion that they can repeat this. In this example, this is a deep down desire to feel important, possibly idolised and made famous on TV through achievement, and copy their hero.  At the moment of the decision to try the sport, they have no concept what training and sacrifice is involved. I believe we really fall in love with a sport when we begin playing it, rather than watching on the TV, although there has to be that spark of interest that says, “I want to play this game.”

To be a champion, there has to be more than just a goal. There is a burning desire to be the best. Outside distractions are unwelcome if they do not help the athlete move another step closer to their goals.

By the way, a champion’s goals are lived every day. They eat, sleep and breathe the sport. They know exactly what they want to achieve, who their biggest threats are, who can help them achieve their goals, what foods to eat, what training methods are required, how often they must train etc.

Can you see the clarity that is required to be a champion? To become a champion there has to be a higher degree of selfishness with the athlete. They make decisions every day, sometimes extremely difficult choices, especially when temptation is placed in front of them. They feel sluggish but need to train. For most of us, we would give ourselves the day off. A champion won’t do that.

A champion will have a strict training timetable, understanding what and why they are working on. They’ll also record their activity to continue measuring their progress.

Whenever you find a champion, there will also be a good support team. This could be family, trainer, coach, nutritionist, physio psychologist etc. This is the team that is dedicated to help the athlete train hard and compete.

Of course, this is just an overview rather than in-depth breakdown.

Let’s Compare A Champion, To Development At Club Standard Badminton

For most of us, we are the one person team, except when we need help. For the average club player, improving their game means turning up to club night to practise. But, they don’t practise because clubs are not set up to do so and, most do not encourage development. So, practise means playing games.

The average player uses badminton as a means of getting and keeping fit rather than getting fit to play better badminton. They are therefore “match fit” but not fit enough to really compete at a higher level where the demands placed on the body are so much higher.

Most club players are failing with their conditioning.

Let’s analyse skill levels. Yet again, on average, skills are relatively low. Knowledge is also lacking, and therefore the average club player doesn’t know very much. They learn from watching other players who they think are better, but that doesn’t mean they are learning the right things.

Having trained so many club badminton players on my courses at Lilleshall, it still amazes me how players lack positioning knowledge and skill. It also frightens me with some of the beliefs players have about positioning in doubles.

At an average level, most club players are therefore failing at developing their skill.

I used to visit badminton clubs for a coaching night and smiled watching a select group decide that they didn’t want coaching. So, they want to improve but then do not take the opportunity when a coach is provided. What does this tell you about their psychology? Basically, they want me to show up and wave a magic wand.

Here’s where we really get it wrong…

Remember, we are talking about average players, however, even the better ones will still suffer some of the same traits.

I’ll make a bold statement here… Despite my qualification and experience in badminton, I cannot hit a forehand clear well enough! Let me add, that I don’t play games, only coach. I can play a clear to a standard. My technique is good and accurate. However, I have not been tested against an international player where I would be expected to move fast and hit consistently and accurately in order to compete at their level. In such conditions, my forehand clear would be deemed not good enough. I accept this, however, as I do not play, and most likely won’t be competing, I am happy with this. If I decide to compete, then I know I would make a lot of changes to my week in order to prepare correctly.

Many players believe that they can play the game fairly well. They think they can hit a forehand clear etc etc. however, note my comments above about my forehand clear. There is always that element of understanding the skill is good …to a certain standard.

From my courses, I expect a good 40% or more players do not hold the racket correctly. Most of the time, the percentage is a lot higher. From what I’ve seen, except for good players, more than 75% of players do not hit the shuttle properly. It’s another bold statement but having seen so much club badminton I think my figure is very conservative.

And here’s the big deal… very few players have a desire to play basic shots to a high standard. Instead, they want to learn the “advanced” techniques, thinking this is the missing part of their game.

In reality, the psychology here is totally flawed. Advanced shots work best when they build on other skills. This game is won by the player or pair who make the least number of mistakes on court. The game is not won by the player who hits the most winners, unless a player has a huge smash and the opposition have no defence.

Advanced, county and international players recognise basics matter. That’s why they continue to practise them. These are the foundations, the building blocks to higher levels of skill. Only a small percentage of players attain such skills which is a shame as every player is capable… they just don’t have the desire.

So, within clubs we are failing in the development of skill.

This is a personal choice. How you choose to fuel your body affects your potential in performance. Eating the wrong foods and arriving for a tough match is going to place massive demands on your body. The internal damage you cause by incorrect fueling may not be felt immediately, however, the damage is done. Good nutrition counters this damage.

I’m sure you agree that your muscles need the correct fuel to perform at their best. So, arriving from work without eating anything, or having just eaten, and expecting to perform well, is a big ask. This happens every week in club badminton and should be avoided.

If you would like to know the nutrition I use and recommend, feel free to drop me an email.

And What About Psychology? 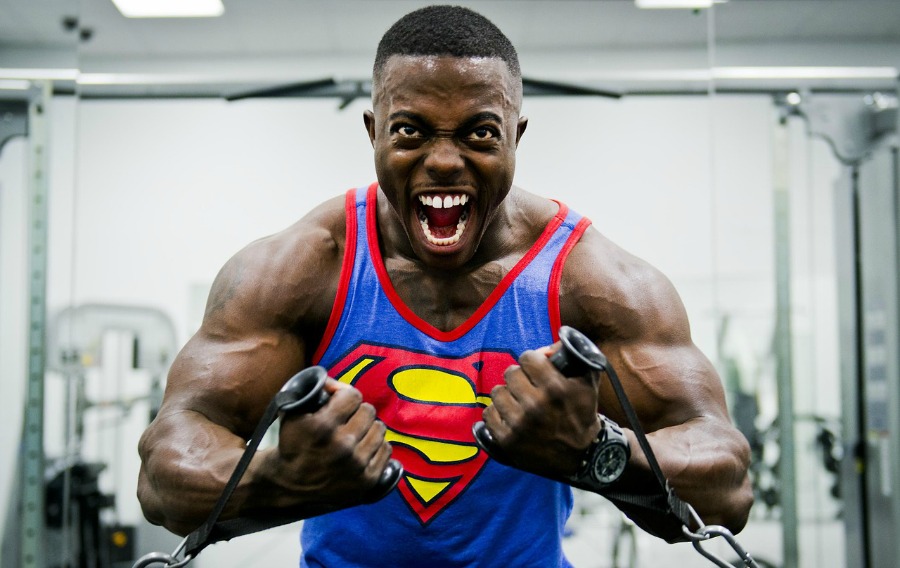 OK, I’ve already described how the average badminton player is failing and therefore restricting their ability to grow technically and physically.

It’s important to temper this article by acknowledging that the average club/social player, plays badminton for fun. I accept this. After all, we can’t all be champions. However, there is still huge competitive spirit in these players. This is the interesting point. Whilst the competitive spirit is high, it is fed by desire to win without the goals, aspirations, dedication and sacrifice of a champion. This is why there is such a vast difference between the two types of player.

“it’s in the moment of our decision that our destiny is made.”

The average club player makes choices about the components of performance and generally dismisses them. Whilst the desire to win is strong, they are not prepared to pay the price to be able to perform better at badminton. I have no issue with this, because the game is fun and we all need to be reminded that we play because it is part of our requirement for entertaining leisure.

A few decisions made here and there can change everything. A desire by the club to set aside one court for one hour to allow players to practice is a start. Knowing what and how to practice may require the input from a coach, however, it will make a difference.

If a player practices their serve, net shots and say, drop shot which results in them making less errors in a match, then chances are they will win more points. This can completely change a result. I won’t labour the point here as I’m sure you can see beyond in terms of the components of skill and how they affect performance.

When writing this series of articles, I wrestled with the decision whether to write the second article this way. I know there is expectation to move forward and possibly discuss “more important stuff” that will help league, county and international players… this will happen.

However, as there are a huge number of players at club standard reading these articles I felt it was important to show where club badminton fails to provide a player with a platform for growth. As with all opportunities for change, it takes a decision. It’s the decision of the club to offer this opportunity and the decision of each player whether to do anything with the opportunity. And there lies another issue and underlines the psychology at club level that is sabotaging performances on court.

In part 3, let’s get very busy… I’ll be discussing the psychology of training on court. Stick around as this is a huge topic and hopefully you’ll find a number of areas that will help you make breakthroughs in your game.