It’s 7:15 am on Wednesday morning. We are already awake, have eaten breakfast and preparing rackets, so we haven’t caught up on our sleep yet. It’s going to be a busy morning with players collecting their rackets before heading off into the arena. That was the plan although it could change at any time.

We have a number of simple systems when stringing at the All Englands. If a player delivers more than one racket, then one stringer will restring all of these frames to ensure they are identical. Me and Mark string on different stringing machines and therefore it is important we respect the slight differences in machine and calibration. Whilst we are talking fine margins, it’s important to the players.

The other system we have is regarding grommet replacement. When we receive some of the older rackets from players, most of the time the grommets are looking tired. They have been turned numerous times by other stringers which means they need replacing. When we are against tight deadlines, we replace split grommets as there isn’t the time to spend on full grommet replacement. When there is a little less pressure, we will completely re-grommet the frame, clean it and then restring. This will hopefully provide greater longevity on the string and possibly save numerous lost points due to string breakage during the rally. 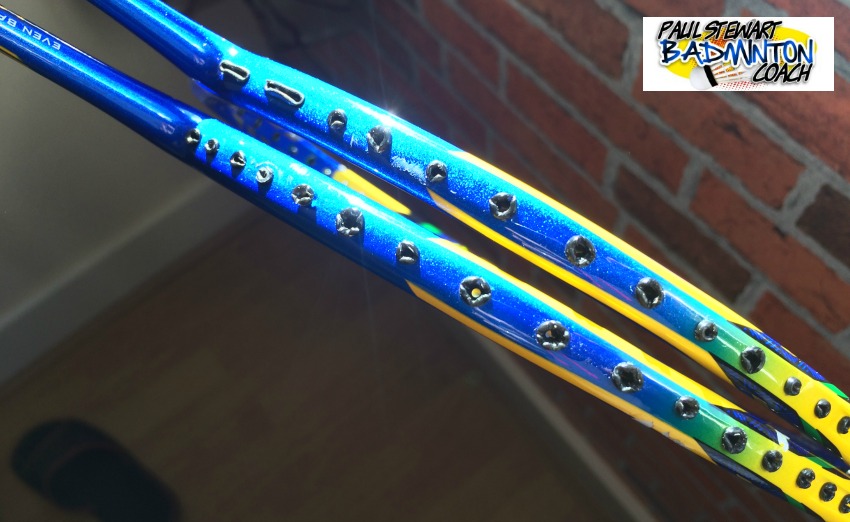 At some stage in a day, one of us stops stringing and spends time preparing the rackets that need this kind of attention. So, if a player brings six rackets and two require more preparation time, one will begin restringing the four good ones and the other stringer will prepare the other two frames. By the time the original four rackets are completed, the remaining two are waiting to be done and the other stringer is already at work on other frames. It’s a good, simple system. As me and Mark work well together, it doesn’t matter to us who prepares the frames.

By 11am all frames have been prepared. Ben from Victor UK has arrived and more banter is in flow. We have installed the Victor banner on the balcony. We have cleared most of the Monday/Tuesday frames and there are around a dozen remaining. With so much accomplished early in the week, I am commencing my other duties which are to promote the Victor brand. Me and Ben are heading for the arena.

We leave the apartment and bump into Son Wan Ho and Sung Ji Hyun who are returning from a practice session. Who can resist such a photo opportunity? And then we’re off into the arena. 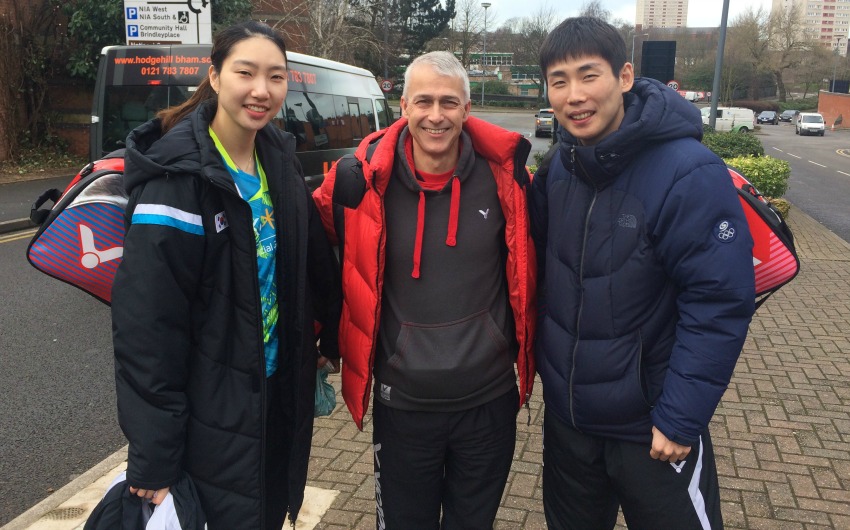 Wow, there are so many games to watch. I’m already receiving texts from people wanting to meet and it’s not long before I’m in and out of the spectator area meeting and greeting old friends and making a few new ones. This is what I love about the All Englands. It’s a place to share our love of badminton and enjoy exchanging information.  I check my phone frequently in case Mark asks me to return to the stringing room.

I’ve got a great seat in the corner with a side on view of the court to watch Lee Chong Wei in the first round. I’ve seen him play often. This time, I noticed something I had seen before, but hadn’t realised how important it was. That’s noted in my mind as an area to work on in coaching.

Wednesday was a good day. There were lots of meetings and many hours of great badminton to enjoy, topped off with a meal with Ben in a local burger restaurant. Of course, we returned to the arena to watch a little more before close of play. As we were leaving the arena, I spotted my favourite singles player, Lee Chong Wei. Thankfully he was very gracious and agreed for me to have a photo with him – my day couldn’t have been better! When returning to the apartment, I got the update from Mark and prepared a few rackets. 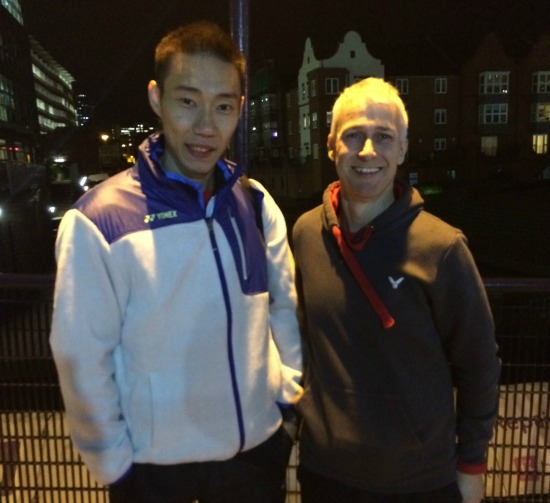 Thursday was very similar to Wednesday. We awoke slightly later and began stringing before 9am. The doors to the apartment were already open so players could collect their rackets. I have a number of meetings planned for the day and a very special trip to the local retailer Racketline.

I was collected from the apartment and driven the short distance to Racketline. Wow, what a shop! I was like the little boy in the sweet shop. There was an entire wall of badminton rackets, loads of clothing, shoes, accessories and bags galore. It’s the best racket store I’ve been in for over 20 years. If you live in the Midlands, I highly recommend you pay Racketline a visit.

I spent the morning at Racketline discussing their plans. Pritesh is a wonderful guy and a great host. He deserves to be successful. He works so hard for badminton players and the local community. Please ensure you give him your support.

Reluctantly I left Racketline as I had a series of meetings in the arena. Ridiculously, at one time I had a queue of 6 people to meet – it was unbelievable! By the time I concluded the last meeting, I had to run to meet up with the Victor team and Pritesh, as we had arranged a meal in an Italian restaurant. 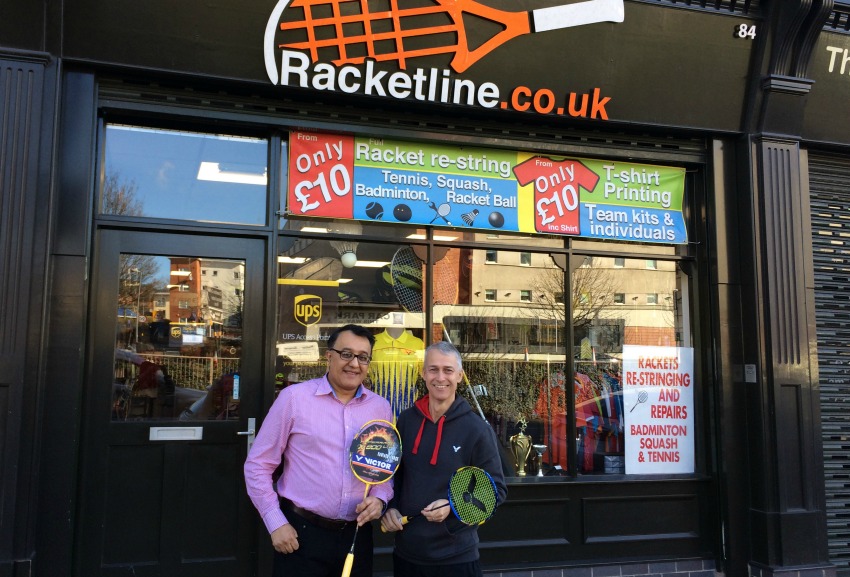 We sit down to eat and then we noticed who else was in the restaurant. There’s a few Danish players including Astrup, Rasmussen and Boe. Then, a group of people from Yonex arrived in suits. They were quickly followed by Lee Yong Dae and Peter Gade – two legends. Lee Yong Dae was unveiled as the latest Yonex legend earlier in the day. It’s funny, as the previous year I was stringing his rackets at this tournament as a Victor player. A lot can happen in a year! I was still dressed in my Victor gear. Lee Yong Dae must have recognised me as he walked over to shake my hand. It was good to see him again, although I felt slightly disappointed that Victor hadn’t retained him.

Some of our team had photos taken with Lee and Peter. I really wanted to but felt it wasn’t right walking into the Yonex camp, dressed in Victor clothing to ask for a photo – it’s important to respect other brands. We had a great night in the restaurant and I have to thank Dave Eddy for the invitation and the meal. It is always good to spend time with Dave. During the meal he was talking about the NBL (National Badminton League) and what was needed to strengthen the league. Sadly, since then Badminton England have cancelled the league following the funding cuts.

I returned to the apartment where Mark had finished for the day. It’s quarter finals day on Friday and there are numerous Victor sponsored players still in the tournament.  There’s something good to look forward to and more stories to tell!